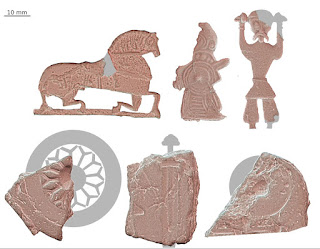 Figurine motifs from Ribe, Denmark reveal a variety of designs were manufactured at the site.
MUSEUM OF SOUTHWEST JUTLAND, CC-BY-SA
Archaeologists long assumed Valkyrie figurines represented Norse mythical beings. A new study of how and where they were made challenges that.
Mysterious, ancient female figurines have been found by the dozens all over Denmark, and as far afield as England and Russia: inch-long bronze depictions of long-haired women, often wearing crested helmets and long dresses, and armed with shields and swords. The small amulets date back more than a thousand years, to the height of the Viking Age.
But because Viking women weren’t typically buried with weapons—unlike their male counterparts—researchers reached into sagas and mythology to explain the armed female figurines and concluded that they represented Valkyries, the  mythical warrior women ancient Scandinavians thought were responsible for transporting slain warriors to the afterlife.
“The images had always been understood in terms of what we know of Norse mythology,” says Pieterjan Deckers, an archaeologist at the Free University of Brussels.
Read the rest of this article...
Posted by David Beard MA, FSA, FSA Scot at 15:57