The only Viking helmet ever found in the UK

Collections Officer Christine Hutchinson of Preston Park Museum in Stockton on Tees on a locally-found Viking helmet that is the only one of its kind in the UK
This is the only Viking helmet to be found in the UK and only the second near complete one to be found in the world, so it’s an amazing discovery.
It was however found back in the 1950s by workmen digging trenches for sewage pipes in Yarm – just down the road from us – and we know that no archaeological surveys were done at the time. So up until very recently there was always a kind of question mark over it.
Read the rest of this article...
Posted by David Beard MA, FSA, FSA Scot at 10:44

Vikings' maritime expeditions brought them out of Scandinavia and into Northern Europe, where they intermingled with local populations. (Pmxfuel)
The term “Viking” tends to conjure up images of fierce, blonde men who donned horned helmets and sailed the seas in longboats, earning a fearsome reputation through their violent conquests and plunder.
But a new study published in the journal Nature suggests the people known as Vikings didn’t exactly fit these modern stereotypes. Instead, a survey deemed the “world’s largest-ever DNA sequencing of Viking skeletons” reinforces what historians and archaeologists have long speculated: that Vikings’ expansion to lands outside of their native Scandinavia diversified their genetic backgrounds, creating a community not necessarily unified by shared DNA.
As Erin Blakemore reports for National Geographic, an international team of researchers drew on remains unearthed at more than 80 sites across northern Europe, Italy and Greenland to map the genomes of 442 humans buried between roughly 2400 B.C. and 1600 A.D.
Read the rest of this article...
Posted by David Beard MA, FSA, FSA Scot at 17:53 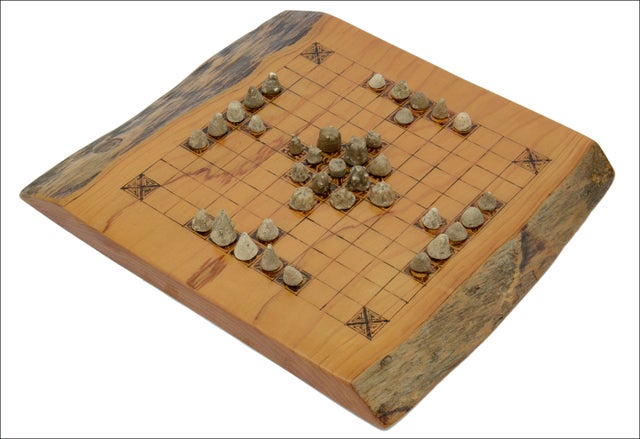 The 37 original pieces on a board commissioned by auctioneers Dix Noonan Webb
(Dix Noonan Webb)
A metal detectorist has unearthed a viking board game in Lincolnshire dating back to 872 AD.
Mick Bott, a retired miner, made the rare discovery of a complete set of 37 pieces used in Hnefatafl — a chess-like game popular with soldiers for its strategic nature — at a site next to the River Trent.
The 73-year-old had spent 20 years searching for items at the location where, thanks to his efforts, historians now know Vikings set up camp throughout the winter of 872 AD.
From his first detecting session at the Torksey site in 1982, Mr Bott and two fellow detectorists unearthed hundreds of coins, strap ends, brooches, and mounts, all of which were from the ninth century.
“It was later on after showing many of our finds to the Fitzwilliam Museum in Cambridge that the experts realised that this was the Viking winter camp of 872/3 when several thousand men of the Viking army overwintered,” Mr Bott said.
Read the rest of this article...
Posted by David Beard MA, FSA, FSA Scot at 10:22

The discovery of a series of lost waterways across West Mainland Orkney offers new insight into trade and transport across the area in the medieval period.
[Image: University of St Andrews]
New research involving a combination of geophysical mapping, sediment sampling, and the study of place-names has identified a network of waterways that ran through West Mainland Orkney in the Viking and late Norse period.
Examples of Old Norse place-names can be found all over northern Scotland and the Isles, originating in the medieval period, AD 790-1350, and reflecting when Scandinavian earls held power in Orkney. The recent research was prompted by the observation that there are several places that have names with sea- or boat-related connotations but are located far inland in central Orkney today. These include Greenay (meaning shallow waters) and Knarston (derived from the Old Norse words for a transport vessel and a farm where such vessels were moored). Scientific investigations have now been able to shed light on this mystery, revealing that these sites were in fact located along a previously unknown series of ancient waterways.
These lost waterways are difficult to recognise on the surface because of modern agricultural activity and artificial drainage networks. However, the recent research (published in the Journal of Wetland Archaeology: http://dx.doi.org/10.1080/14732971.2020.1800281), which was carried out by a team from the University of the Highlands and Islands, the University of St Andrews, and the University of Wales, was able to identify them using remote-sensing geophysical methods, combined with environmental information from sediment samples in cores taken from multiple sites across the area.
Read the rest of this article...
Posted by David Beard MA, FSA, FSA Scot at 10:07

THIS NORWEGIAN ISLAND CLAIMS TO BE THE FABLED LAND OF THULE

Greek explorer Pytheas traveled to what is now the British Isles and farther north in a trireme, exploring and mapping much of the coastline. He wrote of Thule, an island that people have searched for ever since. This illustration is by John F. Campbell from the 1909 book The Romance of Early British Life. (Chronicle/Alamy)
Residents of Smøla believe they live in the northernmost location mentioned in ancient Greek and Roman literature. Other contenders say not so fast.
On a Monday late in April 2020, the tiny, rocky, sparsely populated Norwegian island of Smøla, which had been sealed off from the outside world for three months, reopened its one point of access, a ferry terminal that connects it to the coastal cities of Trondheim and Kristiansund. The move brought joy to the residents of Smøla, who often travel to the mainland for supplies and recreation. It also gladdened tourists and adventurers, particularly those with an interest in the fabled land of Thule, also known as ultima Thule, whose exact location in the world has been debated for over two millennia. According to one recent school of thought, Smøla is the island with the strongest claim to that location: reopening Smøla thus meant that it was once again possible to set foot on Thule.
Read the rest of this article...
Posted by David Beard MA, FSA, FSA Scot at 09:49