Preserving the Battle of Hastings from contamination


The Battle of Hastings is regularly fought all over again by enthusiastic re-enactors, before large crowds of spectators. The problem is that they are depositing material that could compromise the archaeology of the historic site. But now the University of Huddersfield's Dr Glenn Foard -- one of the world's leading battlefield archaeologists -- is developing a unique project designed to unearth whatever genuine material survives from 1066. 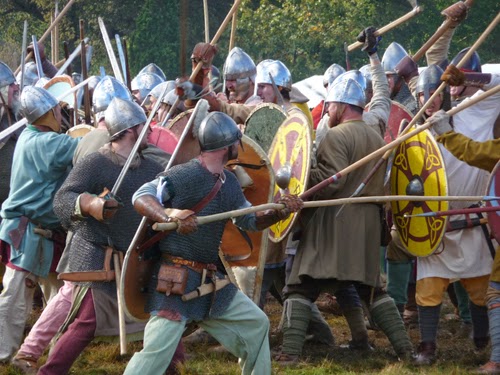 The East Sussex 1066 site gets the vote as one of the world's 10 best historical re-enactments.  Hastings is described as "the most-remembered armed conflict in British history" and  the re-enactments every year now involve thousands of participants and spectators  around the world [Credit: University of Huddersfield]

The first stage, likely to take place in spring 2015, would be to spend a week machining away the top layers of soil at a substantial area of the battlefield, in order to eliminate modern artefacts. Then there would be a search for genuine remains from the battle of 1066.

An important dimension of the project would be public involvement. Trained archaeologists would carry out the actual survey, but there would be parallel sessions nearby, partly aimed at children and parents, which would provide insights into archaeology, including the use of metal detectors to survey a site.

A newly discovered female figurine amulet from Revninge in the east of Denmark represents a very interesting find due to her remarkably detailed Viking Age dress.

On April 22, 2014, Paul Uniacke had started to explore a field near Revninge with his metal detector – several items had already been recovered when to his astonishment a small fine figurine appeared. He instantly recognised it as Viking Age and immediately contacted Østfyns Museums, who confirmed his thoughts and started the process of conservation.

It is not always easy to imagine how people of the Viking age really looked. However, the discovery of this small gilt silver figurine contains a wealth of detail giving new knowledge about costume and jewellery of the period.
Archaeologist Claus Feveile, Department of Landscape & Archaeology at Østfyns Museums, explained, “Small characters from the Viking period are extremely rare and Revninge-woman’s dress is incredibly detailed which will contribute to the discussion on the appearance of clothes and how they might have been worn.”


A skeleton discovered on an archaeological dig in East Lothian may be a 10th Century Irish Viking who was king of Dublin and Northumbria.
King Olaf Guthfrithsson led raids on Auldhame and nearby Tyninghame shortly before his death in 941.
The remains excavated from Auldhame in 2005 are those of a young adult male who was buried with a number of items indicating his high rank.
They include a belt similar to others from Viking Age Ireland.
The find has led archaeologists and historians to speculate that the skeleton could be that of King Olaf or one of his entourage.
Read the rest of this article...
Posted by David Beard MA, FSA, FSA Scot at 08:47