Cave paintings, castles and pyramids, Neanderthals, Romans and Vikings - archaeology is about the excitement of discovery, finding out about our ancestors, exploring landscape through time, piecing together puzzles of the past from material remains.
These courses enable you to experience all this through online archaeological resources based on primary evidence from excavations and artefacts and from complex scientific processes and current thinking. Together with guided reading, discussion and activities you can experience how archaeologists work today to increase our knowledge of people and societies from the past.
The following courses are available:
Posted by David Beard MA, FSA, FSA Scot at 16:11

The Battle of Fulford: War breaks out over 'forgotten' Yorkshire battlefield

Local historians say it's the site of the curtain-raiser to Hastings in 1066. The council wants to build hundreds of houses on it

Combatants are squaring up to do battle over the fate of a Yorkshire field more than 1,000 years after they say an earlier battle was fought there that helped to change the course of British history. Rival groups have issued a call to arms over the future of what some historians claim is the true site of the "forgotten" Battle of Fulford in September 1066. Local historians are fighting a rearguard action over developers' plans to build 600 homes on a field near York which they say is the site of the historic battle.

The Battle of Fulford is where an invading Viking army defeated an Anglo-Saxon force led by the northern earls, Edwin and Morcar. Historians say the battle is important because the defeat forced the Anglo-Saxon king, Harold Godwinson, to march his army north to fight and defeat the invaders at the Battle of Stamford Bridge five days later. Although victorious, Harold's forces suffered losses at Stamford Bridge and were exhausted after the march, and the campaign in the north diverted the king's attention away from the south coast, where William of Normandy launched his invasion.

The most complete view yet of a possible human ancestor uncovered in South Africa has revealed an intriguing mix of human and ape traits.
The two-million-year-old remains of several partial skeletons belonging to a previously unknown humanlike species were found in 2008 near Johannesburg.
The new analysis shows this species -Australopithecus sediba - had a human-like pelvis, hands and teeth, and a chimpanzee-like foot.
The findings appear in Science journal.
In six separate research reports, scientists probed further into the anatomy of a juvenile male skeleton, commonly referred to as MH1, a female skeleton, known as MH2, and an isolated adult tibia or shinbone, known as MH4. 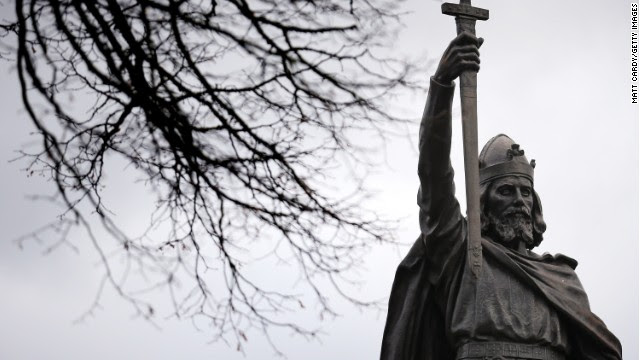 Archaeologists dug up an unmarked grave in a quiet English churchyard in search of remains of King Alfred the Great, a ninth century monarch credited with fending off the Vikings.


The exhumation was apparently triggered by fears that interest over the recent discovery of the skeleton of Richard III could lead grave robbers to dig the area for his bones.

Alfred the Great is known to generations of schoolchildren through a popular legend that tells of his scolding by a peasant woman for letting her cakes burn while he watched over them.

He was at the time preoccupied with the problem of how to repel the Danes, who had captured swaths of Anglo-Saxon England.

The Vengeance of Ivarr the Boneless

A section from the Stora Hammars I stone, preserved at Gotland in Sweden. The carving seems to show a victim about to be cut open from the back; a bird of prey appears behind him. It has been suggested that this depicts the rite of the blood eagle. Image: Wikicommons.

Ninth-century Scandinavia has had good press in recent years. As late as the 1950s, when Kirk Douglas filmed his notorious clunker The Vikings—a movie that featured lashings of fire and pillage, not to mention Tony Curtis clad in an ahistorical and buttocks-skimming leather jerkin—most popular histories still cast the Denmark and Norway of the Dark Ages as nations overflowing with bloodthirsty warriors who were much given to horned helmets and drunken ax-throwing contests. If they weren’t worshiping the pagan gods of Asgard, these Vikings were sailing their longships up rivers to sack monasteries while ravishing virgins and working themselves into beserker rages.

Since the early 1960s, though—we can date the beginning of the change to the publication of Peter Sawyer’s influential The Age of the Vikings (1962)—rehabilitation has been almost complete. Today, the early Viking age has become the subject of a History Channel drama, and historians are likely to stress that the Vikings were traders and settlers, not rapists and killers. The Scandinavians’ achievements have been lauded—they sailed all the way to America and produced the Lewis Chessmen—and nowadays some scholars go so far as to portray them as agents of economic stimulus, occasional victims of their more numerous enemies, or even (as a recent campaign organized by the University of Cambridge suggested) men who “preferred male grooming to pillaging,” carrying around ear spoons to remove surplus wax. To quote the archaeologist Francis Pryor, they “integrated into community life” and “joined the property-owning classes” in the countries they invaded.