This is how the populace of the Orkney Islands lived 5,000 years ago. The Stone Age settlement Skara Brae is preserved so well that it is referred to as “Scotland’s Pompeii”. Recently it was discovered that the Orkney Islanders still have a surprising amount of DNA from the people who dwelled there long before the Vikings arrived. (Photo: Georg Mathisen)


They are proud of their Viking ancestors but are not as Norwegian as they might think. The lion’s share of the genes of Orkney Islanders can be traced to the native peoples who lived their several millennia before Norwegians invaded and annexed the islands in the 9th century.

British and Australian researchers have mapped the genetic structure of today’s Brits. They found that the only place where the Viking inheritance is genetically strong is the Orkney Islands. Orkney were under Norwegian rule for centuries and as a result, 25 percent of Orkney Islanders’ genes can be traced to Norway.
The locals tend to be enthusiastic about their Viking heritage, which has now also been strongly identified in their genes:
Read the rest of this article...
Posted by David Beard MA, FSA, FSA Scot at 18:30

RCHAEOLOGISTS have discovered a wooden butter churn lid unearthed at Norton Bridge is from the Saxon period following scientific tests.
Evidence of prehistoric activity was uncovered in the same area of the site and archaeologists believed the butter churn could be from the same period.
But radiocarbon tests have revealed the lid of the butter churn dates from the early medieval period when the area was part of the Mercian kingdom.
The tests have put a fragment of wood found with the lid as dating between AD715-890, so the lid is from the same period as the Staffordshire Hoard.
Read the rest of this article...
Posted by David Beard MA, FSA, FSA Scot at 17:28

The Viking’s grave and the sunken ship


Mapping archaeological digs takes plenty of time and a lot of measuring, photographing, drawing and note taking. Now, most of this work can be done with a technique called photogrammetry. 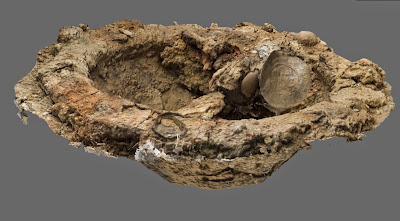 Detailed image of a shield boss found in what is likely a Viking’s  grave in Skaun
[Credit: NTNU University Museum]

Photogrammetry is a method that uses two-dimensional images of an archaeological find to construct a 3D model.

You don't need and special glasses or advanced equipment to use make use of this new technique. Together with precise measurements of the excavation, photogrammetry can create a complete detailed map of an archaeological excavation site.

"This is still a very new technique," say archaeologists Raymond Sauvage and Fredrik Skoglund of the Norwegian University of Science and Technology's University Museum.

Photogrammetry is in many ways much more precise than older, more time-consuming methods.

The year is 873 and Frida is deciding what to wear. Her new red dress is finally ready, as are her freshly polished shell-shaped brooches designed to hold it in place at her shoulders. The dress is the newest cut in Viking fashion.
Of course, we don’t know exactly how such a scenario played out. Nevertheless, to a Viking woman, Frida’s dress in vibrant red with matching brooches could have been hugely popular. In fact, red and blue were among the most popular colours in the Viking Age.
But did the Vikings really have fashion on the mind?
"Yes," says Ulla Mannering from the Centre for Textile Research at the National Museum in Copenhagen.
Read the rest of this article...
Posted by David Beard MA, FSA, FSA Scot at 08:43

A rare Nordic language used by a tiny forest community is set to be taught in a preschool in central Sweden. Elfdalian, which shares some similarities with Old Norse is a hot topic at an international linguistics conference in Copenhagen this week, as Scandinavian language experts campaign to stop it dying out.

It might sound like something from Lord of The Rings or The Local's recent April Fool's Day prank but Elfdalian is a real language currently used by around 2500 people in central Sweden and is understood to date back to Viking times.

Previously regarded as a Swedish dialect, leading linguistics experts now consider it a separate language and are battling to save it, after figures emerged that less than 60 children can currently speak it.

The little stick found underneath the streets of Odense, Denmark’s third largest city, is only 8.5 centimetres in length -- but it isn’t just any old stick. The so-called rune stick was made in the early 13th century, said Odense City Museums in a press release.
Archaeologists have been digging for a long time at the excavation beneath I. Vilhelm Werners Square in Odense and they were actually just about to stop when they found three pieces of wood which fitted together to make up the rune stick.
It isn’t easy to decipher what the runes say and the stick itself is extremely fragile, explained rune expert and senior researcher Lisbeth Imer from the National Museum of Denmark in the press release.
Read the rest of this article...
Posted by David Beard MA, FSA, FSA Scot at 08:45