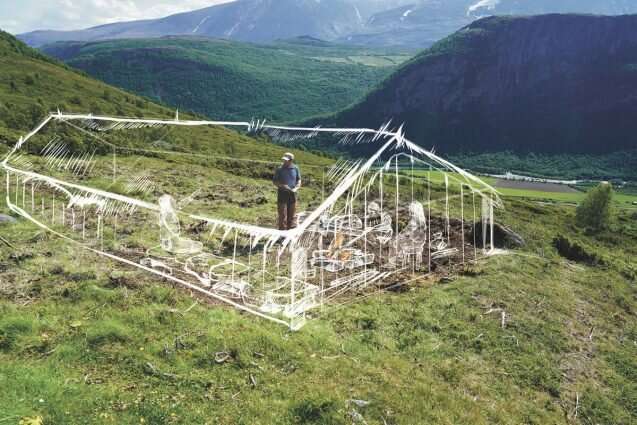 A proposed digital reconstruction of one of the ancient Viking homes,
featuring Secrets of the Ice team member Elling Utvik Wammer.
Credit: Secrets of the Ice. Illustration: Espen Finstad/Hege Vatnaland
The summer of 2011 was unusually hot for southern Norway. Where high mountain passes had been choked with snow and ice in previous years, surveyors and team members of the acclaimed Secrets of the Ice project found only jumbled talus and meltwater. Picking their way through the boulders that covered the ice-free Lendbreen pass, the crew soon realized they had walked into a vast archaeological treasure, one that had stayed frozen for a thousand years. They began to collect countless tools, artifacts and weapons—items that had once been in the possession of Vikings.
After receiving international attention for their discovery, the crew decided to return to Lendbreen this summer in search of deeper answers. Questions remained, such as what purposes had occupied these alpine travelers and where they had been traveling. In search of understanding, team members ventured across and beyond the Lendbreen pass, which over the years has revealed clothing, household items, sleds and animal remains, among other artifacts.
Read the rest of this article...
Posted by David Beard MA, FSA, FSA Scot at 12:04