The bones of a foetus and its heavily pregnant mother have been found in a chamber of All Saints church in York, where three men were found “shoved” into a tomb with grave markings designed to ward off evil spirits during the early 13th century.Ancient serviceable drains, pottery fragments dating from Roman times to the 18th century, entrenched Viking pottery and Anglian pieces with possible links to the baptism of St Edwin, the 7th century King of Northumbria, have also been discovered in the Lady Chapel, where a medieval-style tile pavement has been laid in an English parish church for the first time in 500 years.

Medieval account of Irish battle borrowed from the Iliad


As Ireland marks the millennium of the Battle of Clontarf – portrayed as a heroic encounter between Irish and Vikings which defined the nation’s identity - new research argues that our main source for what happened may be more literary history than historical fact. 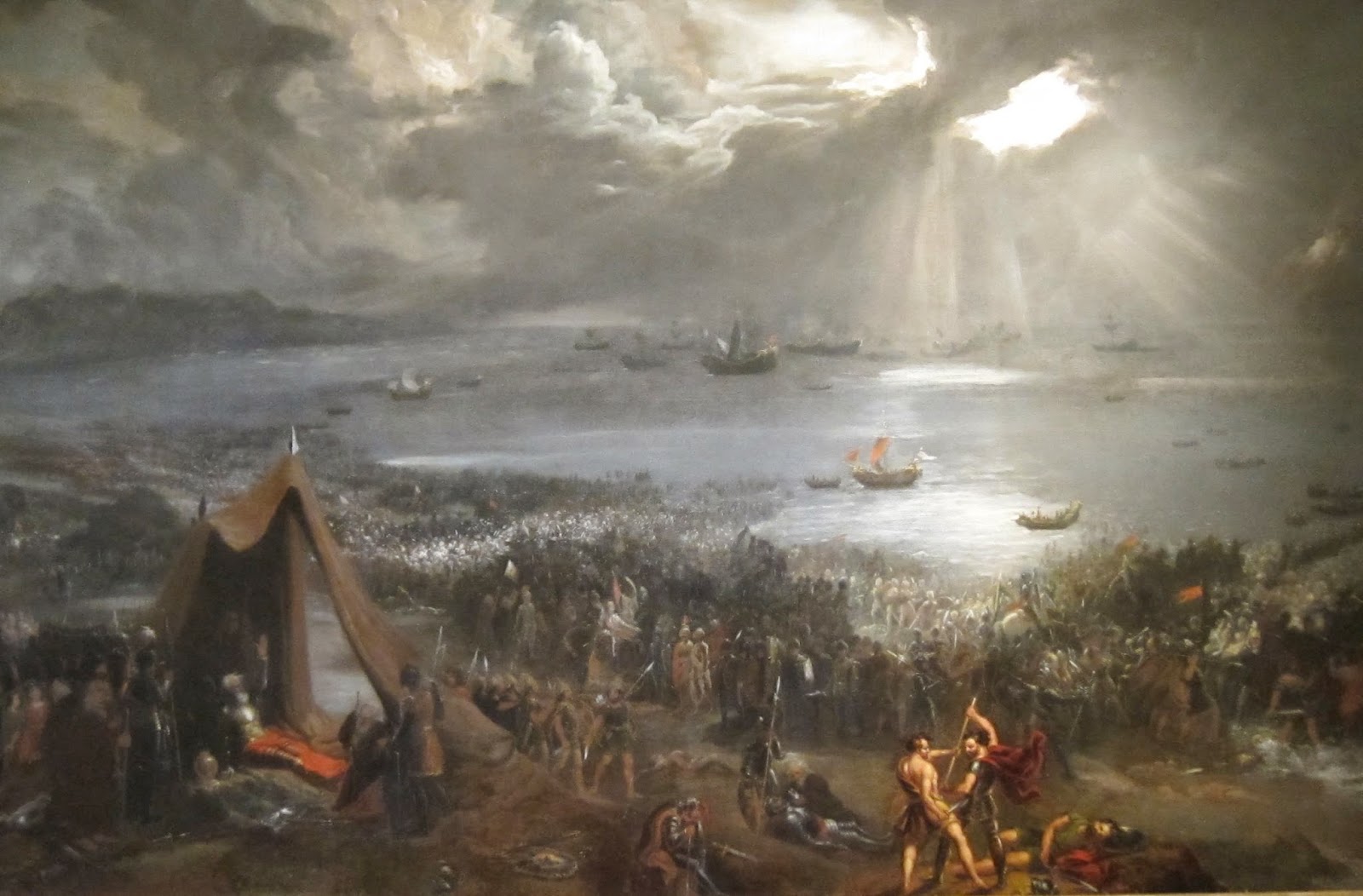 An 1826 painting of the Battle of Clontarf by the Irish artist, Hugh Frazer
[Credit: Isaacs Art Centre/Wikimedia Commons]

The standard account of the Battle of Clontarf – a defining moment in Irish history which happened 1,000 years ago this week – was partly a “pseudo-history” borrowed from the tale of Troy, new research suggests.

The findings, which are to be published in a forthcoming book about the intellectual culture of medieval Ireland, coincide with extensive celebrations in Dublin marking the millennium of Clontarf, which was fought on Good Friday, April 23, 1014.


Scientists pried open the 850-year-old casket of King Erik the Holy on Wednesday, hoping to find out more about the king, his crown, and his eating habits. 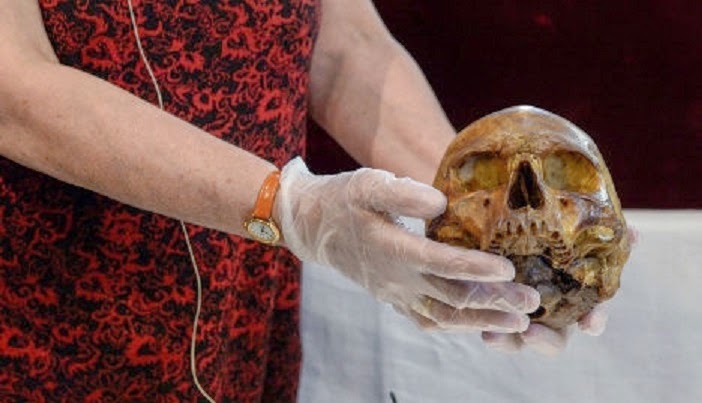 Legend has it the bone damage was a fatal blow from when he was killed on ascension in 1160
[Credit: Bertil Ericson/TT]

The casket contained the bones of King Erik, who was later made a saint, together with a gilded copper crown decorated with semi-precious stones.

"The crown is unique - there's nothing as old as this of its kind in Sweden. It's certainly the oldest medieval royal crown in the country," Åstrand said.

Vikings Live: bringing our shared history to the cinema screen


Bettany Hughes, historian, author and broadcaster, presenter of Vikings Live from the British Museum
When you’re about to handle an archaeological artefact, interesting things happen to your body. In anticipation of the pleasure to come, your heart starts to race a little faster, the hair on the back of your neck might begin to rise, palms can become sticky. And of course there is the nagging knowledge that the security of that unique, precious – sometimes priceless – traveller in time is, physically, in your hands.
Read the rest of this article...
Posted by David Beard MA, FSA, FSA Scot at 19:08

Vikings Live on the horizon


Michael Wood, historian and broadcaster, presenter of Vikings Live from the British Museum
Hotfoot back from Shanghai where I am filming The Story of China, and now very excited about tomorrow night at the British Museum! We had a production meeting yesterday going through the script and suddenly the spine-tingling ‘liveness’ of it all felt very immediate. Vikings Live is now really coming together, with a series of very exciting scenes and a team of terrific contributors. Gareth, the exhibition curator, will even be sweltering in full Viking war-gear to explain the ethos of a warrior society. A string of inspiring experts will be your guides through the glitter and violence of the age, led by everybody’s favourite museum director / magician, Neil MacGregor, who has now turned his hand to A History of the Viking World in a Thousand Objects!
Read the rest of this article...
Posted by David Beard MA, FSA, FSA Scot at 19:06

Mike Selwood, Assistant Boat Manager, National Maritime Museum CornwallIn September 2013, the National Maritime Museum Cornwall was approached by the British Museum and asked if we would produce something Viking to be filmed for theirVikings Live cinema broadcast, after seeing the Bronze Age boat replica that we had built and launched in March 2013.
Of course, we said yes. After plenty of chats with Gareth Williams, the curator of the BP exhibition Vikings: life and legend and Patricia Wheatley, Executive Producer of Vikings Live, our boat restoration team started to build the stem section of a Viking-style boat, to be constructed using traditional methods.
Read the rest of this article...
Posted by David Beard MA, FSA, FSA Scot at 19:03

A 4,500-year-old log boat is among 12 early Bronze Age, Iron Age and medieval craft that have been located in Lough Corrib, along with several Viking-style battle axes and other weapons.
The vessels were discovered by marine surveyor Capt Trevor Northage while mapping the western lake to update British admiralty charts.
Investigative dives were subsequently carried out last summer by the underwater archaeology unit (UAU) of the National Monuments Service, and radiocarbon dating of samples was then conducted.
Minister for Arts, Heritage and the Gaeltacht Jimmy Deenihan, who was informed of the finds recently, has described them as “exceptional”.
The three Viking-style battle axes recovered from one of the vessels will be a centrepiece in the National Museum’s Battle of Clontarf commemorative exhibition, which is due to open later this month.
Read the rest of this article...


A 4,500-year-old log boat is among 12 early Bronze Age, Iron Age and medieval craft that have been located in Lough Corrib, along with several Viking-style battle axes and other weapons. 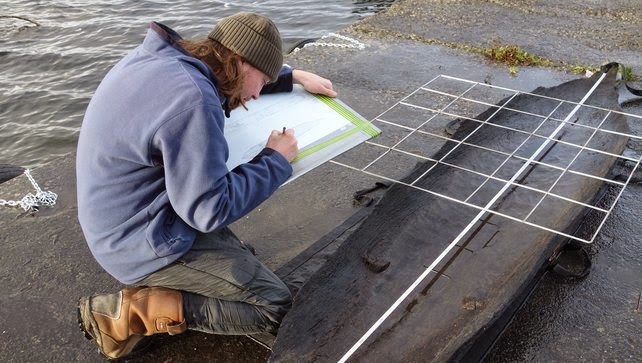 A researcher documents one of the Lough Corrib finds [Credit: RTE News]

The vessels were discovered by marine surveyor Capt Trevor Northage while mapping the western lake to update British admiralty charts.

Investigative dives were subsequently carried out last summer by the underwater archaeology unit (UAU) of the National Monuments Service, and radiocarbon dating of samples was then conducted. Minister for Arts, Heritage and the Gaeltacht Jimmy Deenihan, who wa

The tidal current runs to and fro […] crowded with memories of men and ships it had borne to the rest of home or to the battles of the sea. Hunters for gold or pursuers of fame, they all had gone out on that stream, bearing the sword, and often the torch, messengers of the might within the land, bearers of a spark from the sacred fire. What greatness had not floated on the ebb of that river into the mystery of an unknown earth! … The dreams of men, the seed of commonwealths, the germs of empires.

Joseph Conrad, Heart of Darkness (1899).
Here, surely, we have a passionate and evocative description of the Vikings: bold adventurers stepping forward onto the world stage, ready to set a blaze on four continents and pave the way for the nations that would rise in their wake.
In fact, this passage, taken from Joseph Conrad’s Heart of Darkness, describes the explorers, buccaneers, settlers and merchants – ‘the dark ‘interlopers’ of the eastern trade, and the commissioned ‘generals’ of the East India fleets” – who had set out from the Thames from the 16th to the 19th century, laying the foundations of the British Empire and changing the world forever.
Read the rest of this article...
Posted by David Beard MA, FSA, FSA Scot at 16:23

Raiders... conquerors... fierce in battle and strong in family. These are the images that the world has of Vikings. We know where they lived, and to some degree how they made a living. We know which gods they worshipped and how. Yet the bulk of our knowledge consists of broad brush strokes that omit the nuances of everyday life. The Vikings recorded many things, from The Sagas to business transactions and personal letters. But beyond a brief and occasional mention, two of the many things they didn’t write about were what they ate and how they prepared their meals. The Vikings left no recipes.

To that end An Early Meal, by Daniel Serra and Hanna Tunberg, is a triumph. It is a triumph of a book in the fields of both culinary history and world foods that rips the shroud of mystery off Viking cuisine. It is also the only book available with recipes that even approach authentic Viking Age dishes.