New Lead in the Search for Elusive Norse Settlements

Wayne MacIsaac stands near what he believes may be the remnants of a Norse fortification wall. (Tara MacIsaac/Epoch Times)


CODROY VALLEY, Canada–A story passed down in my family for generations may be the clue to finding a lost Norse settlement.
The only Norse settlement in the New World thus far confirmed by archaeologists is in L’Anse aux Meadows at the northern tip of Newfoundland, Canada. But the Norse sagas tell of other colonizing expeditions.
Last summer, archaeologists announced that they had found evidence of a Norse presence–a hearth used for roasting bog iron ore, which is the first step in the production of iron–at Point Rosee in southern Newfoundland. My uncle, Wayne MacIsaac, was so excited he said he didn’t sleep for three days. He felt vindicated in his long-cherished, but long-ignored, theory that he had found an ancient Norse site in the nearby Codroy Valley where he lives.
His previous attempts to attract the interest of archaeologists to the site had met with failure, but that has now changed. An international team of archaeologists are due to investigate in July.
Read the rest of this article...
Posted by David Beard MA, FSA, FSA Scot at 18:56

IT is an ancient meeting place where Vikings would gather to decide laws, settle disputes and make key political decisions.
Now archaeologists believe they have identified one of the Norse parliament sites – known as a ‘thing’ - on the island of Bute, which points to it being the headquarters of the powerful Norse King, Ketill Flatnose, whose descendants were the earliest settlers on Iceland.
The significance of the mound site at Cnoc An Rath, which has been listed as an important archaeological monument since the 1950s, has been unclear for decades. Some had suggested it could have been prehistoric or a medieval farm site.
However, the idea of the location being a Viking site had been raised through a recent study of place-names on the island, which suggested long-lost names in the area may have contained the Norse word ‘thing’.
Read the rest of this article...
Posted by David Beard MA, FSA, FSA Scot at 10:40

The Rök Runestone was carved in Sweden in the late 800s. Since it was discovered in the 1940s, interpretations of the writing honed in on supposed references to heroic journeys, battles and warrior-kings.

But a new interpretation says the Runestone is in fact referencing itself – and the power of writing, according to a new study.
“The riddles on the front of the stone have to do with the daylight that we need to be able to read the runes, and on the back are riddles that probably have to do with the carving of the runes and the runic alphabet, the so-called futhark,” said Per Holmberg, associate profess of Scandinavian languages at the University of Gothenberg.
The three-part “arc” of the stone concerns the daylight needed to write and read the stone, the carving of the stone itself, and the legacy that is produced by the writing, according to the paper, published in Futhark: The International Journal of Runic Studies.
Read the rest of this article...
Posted by David Beard MA, FSA, FSA Scot at 21:10 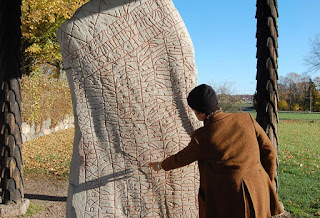