Danish Archaeologists have been busy digging around the old Cathedral in Ribe for several years. Here lies a cemetery, which was abandoned about 1050. The sensational character of the find has however more to do with the fact, that the earliest graves have been dated to around 850 – more than a 100 years before Denmark was officially Christianised according to the famous rune-stone of Harold Bluetooth in Jellinge.

All in all the archaeologists believe there were between 1500 -2000 graves in the cemetery of which at least 60 (and probably 75) belong to the earliest phase. The dead persons have been buried in a number of different types of caskets made of wood, one of which may even have been a small boat. However, the graves are all pointing towards East and no grave-goods have been found. Strontium analysis has shown that the buried persons grew up locally.

"Vikings" are taking to the water to raise money for a south Cumbria museum hoping to house a newly-acquired treasure hoard.

Barrow Dock Museum raised £50,000 to buy the hoard, and now wants to build a special Viking gallery.
Re-enactor warriors are rowing a replica longboat around Derwent Water to raise the cash.

The team, from Herlid Vikings group, will set off from Lodore to the Keswick boat landing, where they will hold a combat display.

The Jorvik Viking Centre in York has launched its exhibition Valhalla: Examining Viking Burials in the British Isles, open now until the 5th November.

The exhibition will display two Viking-age skeletons from the Hungate excavation in York and a replica of Thorwald's Cross, which is thought to depict the transition of the Viking world of pagan beliefs to the introduction of Christianity.

Groups can also discover how excavations reveal the way Vikings commemorated and celebrated their dead using pagan boat burials, grave goods and ornately carved headstones, such as those found in excavations at York Minster.

In addition, the story of a Viking man buried in the Balladoole ship burial will be told using forensic science and state-of-the-art facial reconstruction. 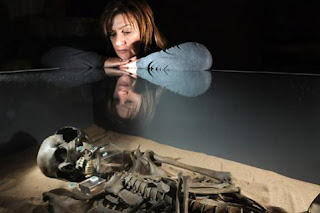 Valhalla; it's a word synonymous with the blood curdling, axe-wielding world of the Vikings and their peculiar belief in an afterlife where fallen Norse warriors drank, ate and caroused wildly with their god Odin.

Little wonder, then, that the Vikings placed great importance on the funerary arrangements that would transport them to this alluring version of the pagan afterlife.

This new exhibition, organised by Manx National Heritage, York Minster and the York Archaeological Trust, lifts the lid on this Viking paradise by looking at Viking burials, artworks, carvings and tapestries from across the British Isles as well as the advanced archaeological techniques employed to unearth and interpret them.


A Viking museum in the German town of Busdorf has welcomed the largest reconstruction of a medieval long-ship, the Havhingsten, or Sea Stallion.

30 metres long and using only the technology available a thousand years ago, it sailed from Denmark to participate in a festival of square rigged ships.

The gruelling experience of its crew of 60 allowed experts to gain insights into the life of Viking seamen.


Among the latest finds at the ancient ship burial site in Salme, Saaremaa, archaeologists have discovered a well-preserved double-edged sword.

“We have discovered typical Salme materials from here, such as swords, rivets, arrowheads, a sheath for a whetstone, and a bunch of modern trash that has been mixed in with the ship's materials,” Ragnar Saag, a master's student of the University of Tartu who led Tuesday's excavation, told ERR radio.

"I think the most double-edged sword is probably the most remarkable artifact that we have found. It is in one piece with a hilt intact, and it provides for good research,” Saag said.

Ongoing excavations at Füsing (map), near the Danish border, link the site to the "lost" Viking town of Sliasthorp—first recorded in A.D. 804 by royal scribes of the powerful Frankish ruler Charlemagne.

Used as a military base by the earliest Scandinavian kings, Sliasthorp's location was unknown until now, said dig leader Andres Dobat, of Aarhus University in Denmark.

Whether it proves to be the historic town or not, the site offers valuable insights into military organization and town planning in the early Viking era, according to the study team.

Climate in Northern Europe Reconstructed for the Past 2,000 Years: Cooling Trend Calculated Precisely for the First Time

An international team that includes scientists from Johannes Gutenberg University Mainz (JGU) has published a reconstruction of the climate in northern Europe over the last 2,000 years based on the information provided by tree-rings. Professor Dr. Jan Esper's group at the Institute of Geography at JGU used tree-ring density measurements from sub-fossil pine trees originating from Finnish Lapland to produce a reconstruction reaching back to 138 BC. In so doing, the researchers have been able for the first time to precisely demonstrate that the long-term trend over the past two millennia has been towards climatic cooling.

"We found that previous estimates of historical temperatures during the Roman era and the Middle Ages were too low," says Esper. "Such findings are also significant with regard to climate policy, as they will influence the way today's climate changes are seen in context of historical warm periods." The new study has been published in the journal Nature Climate Change.

Was the climate during Roman and Medieval times warmer than today? And why are these earlier warm periods important when assessing the global climate changes we are experiencing today? The discipline of paleoclimatology attempts to answer such questions.

Oar walking, underwater wrestling and horse fighting – historian examines the sports and games of the Vikings

Playing ball games is an activity played by children around the world. While today’s parents might worry that their sons and daughters might get scrapes and bruises, in the Viking world such a game could end with an axe being driven into an opponent’s head.

This detail comes from a new article, ‘What the Vikings did for fun? Sports and pastimes in medieval northern Europe’, which was published last month in the journal World Archaeology. In it Leszek Gardeła of the University of Aberdeen uses saga accounts and archaeological evidence to see what men, women and children from Scandinavia and Iceland amused themselves with during the Viking-era, and found that their were several popular pastimes.

For example, a ball game called knattleikr was played, which involved at least four men throwing a ball, chasing and running, and sometimes also involved a bat. Gardeła relates that in the saga of Egill Skallagrimsson, a game was arranged that brought people from around the district to watch. The story goes that “Egill, who must have been under 12 years old, was competing against an 11-year-old boy named Grımr, who seems to have been much stronger. At some point Egill lost his temper and struck his opponent with a bat, but was immediately seized and dashed to the ground. After complaining about these events to his friend Þorðr Granason, Egill took an axe and drove it into Grimr’s head.”

Danish archaeologists said on Tuesday they had re-opened a mass grave of scores of slaughtered Iron Age warriors to find new clues about their fate and the bloody practices of Germanic tribes on the edge of the Roman Empire.


Bones of around 200 soldiers have already been found preserved in a peat bog near the village of Alken on Denmark's Jutland peninsula.

Experts started digging again on Monday, saying they expected to find more bodies dating back 2,000 years to around the time of Christ.

"I guess we will end up with a scale that is much larger than the 200 that we have at present," Aarhus University archaeologist Mads Kahler Holst told Reuters.

"We have only touched upon a very small part of what we expect to be there ... We have not seen anything like this before in Denmark, but it is quite extraordinary even in a European perspective," he added, speaking by phone from the site on damp grazing meadows near Jutland's large lake of Mossoe.

Danish archaeologists believe they have found the remains of the fabled Viking town Sliasthorp by the Schlei bay in northern Germany, near the Danish border.

According to texts from the 8th century, the town served as the centre of power for the first Scandinavian kings.

But historians have doubted whether Sliasthorp even existed. This doubt is now starting to falter, as archaeologists from Aarhus University are making one amazing discovery after the other in the German soil.
"This is huge. Wherever we dig, we find houses – we reckon there are around 200 of them,” says Andres Dobat, a lecturer in prehistoric archaeology at Aarhus University.