The first archeological research in Iceland this year will begin at Hafnir in Reykjanes, southwest Iceland, on Monday. Archeologists will continue their study of a hut which may originate from 770-880 AD, the latter part of the Iron Age, and predate the historical settlement of Iceland in 874.

The remains of the hut at Hafnir. Photo: Bjarni F. Einarsson.
Excavation has been ongoing in the area around the hut, which has been given the name Vogur, with intermission since 2003, Fréttablaðið reports.
Last summer archeologist Bjarni F. Einarsson revealed that carbon age analysis indicated that the hut may have been constructed in the aforementioned period, which garnered considerable attention.

"This place has never been empty..."

"Since the discovery in 1999, of a large settlement site from Early Stone Age (ca 6 000 -- 4 000 BC) close to the river Motala ström, the Swedish National Heritage Board has conducted archaeological excavations north and south of the river.

Among other artifacts the site provides a rich and multifaceted material of bone and antler, which is very rare for this type of Stone Age excavations. This is due to the exceptionally good conditions for preservation. Artifacts found in anaerobic, cool and moist contexts appear to be manufactured yesterday and not to have been deposited in layers of gyttja for 7 000 or 8 000 years.

The structure of the excavated area and the multifaceted artifacts in combination with the projects inter disciplinary constitution creates widening scopes of interpretation of how the site was used, and also broadens our perception of Early Stone Age society."

The video is about 18 mins long and has English sub-titles. 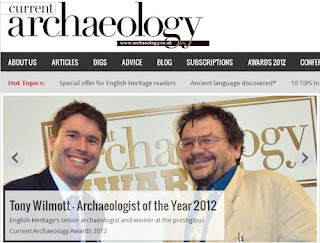 Current Archaeology now has a dedicated news editor in-house, and the news articles are now posted on our website as the stories break rather than simply published in the magazine.  You can also subscribe to receive an email newsletter, and there are RSS feeds for your newreader as well.

The Current World Archaeology website has also been updated.

Go to the Current World ArchaeologyWebsite...

The Furness Hoard of Viking Treasure was found in 2010 at an undisclosed site by a metal detector enthusiast.

The hoard, which includes 92 silver coins, ingots and part of a bracelet, is on display at the Dock Museum in Barrow for one month.

Museum curator Sabine Skae said she hopes to buy the hoard.
Read the rest of this article...
Posted by David Beard MA, FSA, FSA Scot at 15:06

Thirty-seven skeletons found in a mass burial site in the grounds of St John's College may not be who they initially seemed, according to Oxford researchers studying the remains. 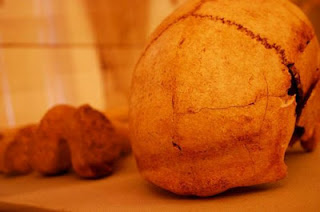 When the bodies were discovered in the grounds of the college in 2008 by Thames Valley Archaeological Services, archaeologists speculated that they could have been part of the St Brice's Day Massacre in Oxford -- a well documented event in 1002, in which King Aethelred the Unredy ordered the killing of 'all Danes living in England'.
However, a new research paper, led by Oxford University, has thrown up a new theory -- that the skeletons may have been Viking raiders who were captured and then executed.


The University of Oxford's online courses in archaeology for Trinity term are now open for enrolment.

"Cave paintings, castles and pyramids, Neanderthals, Romans and Vikings - archaeology is about the excitement of discovery, finding out about our ancestors, exploring landscape through time, piecing together puzzles of the past from material remains.

"Our courses enable you to experience all this through online archaeological resources based on primary evidence from excavations and artefacts and from complex scientific processes and current thinking. Together with guided reading, discussion and activities you can experience how archaeologists work today to increase our knowledge of people and societies from the past."