First new church found on Holy Island, Northumberland, in over a thousand years

For the first time in more than a thousand years, a service will be held today within the boundaries of a newly-discovered church on Holy Island in Northumberland.

The find in the dig by volunteers has been described by historic buildings expert Peter Ryder as “probably the most significant archaeology find ever on Holy Island.”

The excavations, led by Richard Carlton of The Archaeological Practice and Newcastle University, began around a fortnight ago and will finish at the end of this week.

He said: “It is a very exciting and hugely significant find.”

The community archaeology project is part of the Peregrini Lindisfarne Landscape Partnership project, which is backed by the Heritage Lottery Fund. 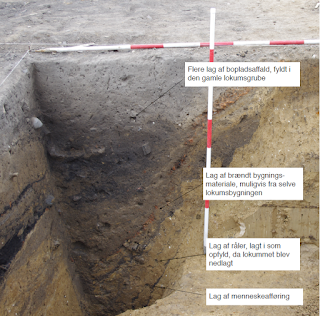 In a Viking settlement on Stevns in Denmark, archaeologists have excavated a two metre deep hole. But it is not just any old hole. This hole, it seems, may be the oldest toilet in Denmark.

Radiocarbon dating of the faeces layer dates back to the Viking Age, making it quite possibly the oldest toilet in Denmark.

“It was a totally random find. We were looking for pit houses—semi-subterrenean workshop huts—and it really looked like that from the surface. But we soon realised that it was something totally different,” says PhD student Anna Beck from the Museum Southeast Denmark.

Apart from representing Denmark’s oldest toilet, the discovery goes against archaeologists’ theories surrounding people’s toilet habits through time, says Beck. Not least because it was discovered in an area of Viking countryside and not in a Viking city. 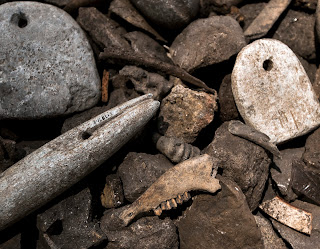 When archaeologist Geir Grønnesby dug test pits at 24 different farms in central Norway, he nearly always found thick layers of fire-cracked stones dating from the Viking Age and earlier. Carbon-14 dating of this evidence tells us that ago, Norwegians brewed beer using stones.
There’s nothing archaeologists like better than piles of centuries-old rubbish. Ancient bones and stones from trash heaps can tell complex stories. And in central Norway, at least, the story seems to be that Vikings and their descendants brewed beer by tossing hot rocks into wooden kettles.“There are a lot of these stones, and they are found at most of the farmyards on old, named farms,” says Geir Grønnesby, an archaeologist at the Norwegian University of Science and Technology’s University Museum.
Read the rest of this article...
Posted by David Beard MA, FSA, FSA Scot at 22:08

Archaeologists in N. Iceland discover Viking age chief buried in ship with his sword and dog

AT THE SITE Archaeologists at work excavating the Dysnes site. Dysnes translates as "Burial-ness". Photo/Auðunn

Yesterday archeologists, who are working at a large burial site in Eyjafjörður fjord in north Iceland, announced that they had discovered the remains of a ship burial dating back to the Viking age. A wealthy chieftain seems to have been buried in one of his boats along with some of his worldly possessions, including a sword and his dog. More unexplored burial sites are believed to be located at the site.


The grave is believed to date back to the 9th or 10th centuries. The sword, which was found close to the surface is in very poor condition. The archeologists expect to remove the sword from the ground today.
A site of regional significance during Viking Age
The archeological dig takes place north of the town of Akureyri at a site which is believed to have been of enormous local importance during the Viking age. A few hundred meters south of the burial site is Gáseyri, which was the primary trading post in Eyjafjörður fjord during the Viking age.
Read the rest of this article...
Posted by David Beard MA, FSA, FSA Scot at 22:06 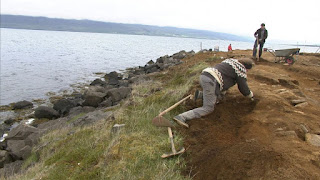 Yesterday archaeologists discovered a second boat burial at an archaeological site at Dysnes ness in Eyjafjörður fjord in North Iceland. On Tuesday a burial site where a Viking age chief was buried in his boat, along with his sword and dog had been discovered. Two other graves dating to the Viking Age have been found at the site. Archaeologists working at the site are optimistic to find more, as the dig has only just started.
Undisturbed gravesNeither boat burial has been disturbed by grave robbers, as many Viking age burial sites have been. Most Viking Age burial sites seem to have been opened up relatively early, only decades after the burial, and valuables, especially swords, removed. The reasons for such grave robbing are not known.Archaeologists working at Dysnes have now found four different Viking age graves at the site. Two were boat burials. An archaeologist working at the dig told the Icelandic National Broadcasting Service RÚV that they expected to find more. "Everywhere we stick a shovel into the ground we seem to find something".