Analysis shows less Viking DNA than expected, and no single group of Celts.

A fine-grained genetic analysis has created a detailed map of genetic variation across the UK. It gives us a clearer picture of the waves of migration that populated the UK and could also contribute to research on genetic diseases.
Obviously, people in the UK these days don’t always stick around where they were born, so people in a given region don’t necessarily share ancestry. But, if you can find people whose ancestry is closely tied to a particular region, it becomes possible to approximate what genomes would have been like a century ago, before people could move around so easily.
A paper published in Nature this week analyzed the genomes of 2039 people whose grandparents were all born within 80 kilometers (50 miles) of one another. This effectively meant that the researchers were sampling the genomes of the grandparents, whose average birth year was 1885 and who obviously had strong ties to a region. This allowed the researchers to investigate the genetic structure of the UK population before the mass movements of last century.
Read the rest of this article...
Posted by David Beard MA, FSA, FSA Scot at 18:07

The Bayeux Tapestry and the Norman Conquest

The Bayeux Tapestry and the Norman Conquest:
A Commemoration of 1066

2016 is the 950th anniversary of the momentous year 1066, which climaxed with the Battle of Hastings and the Norman Conquest of England. The Bayeux Tapestry commemorated the lead-up to that Conquest and we commemorate, in this conference, both historical events and the work of art. We compare The Bayeux Tapestry’s version of history with other sources and examine the cultural milieu that produced and appreciated it. We consider the ways in which the Bayeux Tapestry is unique among medieval textile furnishings; and we examine how The Bayeux Tapestry itself has been and still is being commemorated, from the nineteenth-century replica displayed in Reading to recent and current community projects that portray history in needlework.

Local cults of saints played a role in Scandinavian Christianisation

There is a clear link between the celebration of native saints and the ecclesiastical organisation that emerged in Scandinavia in the 12th century. Yet, according to a new doctoral thesis in history from the University of Gothenburg, important differences can be noted between Sweden and Denmark.

Local cults of saints emerged during the Early Middle Ages in the area of Scandinavia that was separated into the ecclesiastical provinces of Lund and Uppsala, roughly corresponding to modern-day Denmark and Sweden. Dioceses and other institutions were established in both provinces in the 11th and 12th centuries.

This first-ever comparative study of all 23 native saints in both provinces yields a comprehensive Scandinavian perspective that has been missing in previous research on European cults of saints.


When archaeologists performed a routine check on a construction site in central Kiev in late February, they were astonished to discover a medieval street hidden seven meters underground. 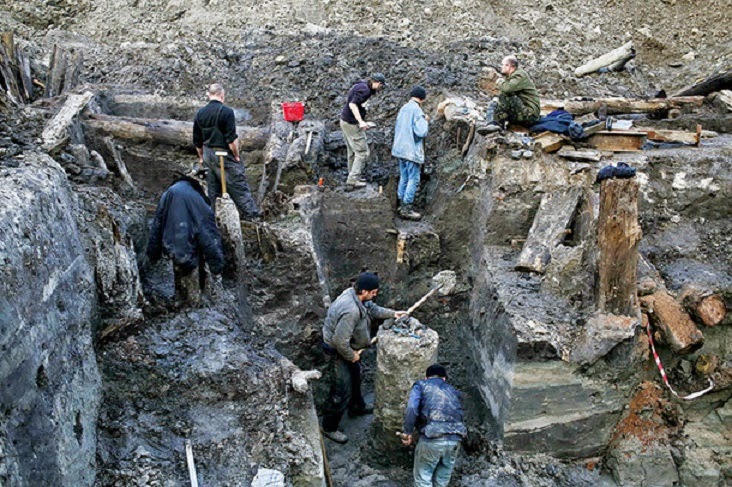 Archaeologists from the Kiev Center of Archaeology dig out a 11th-13th century  street on Poshtova Square in Kiev on March 10. The unique findings s how that ancient Kiev was bigger than historians had presumed  [Credit: © Anastasia Vlasova/Kyiv Post]

The remains of the wooden buildings that date back to Kievan Rus were found at the mall construction site at Poshtova Square in the Podil neighborhood near the Dnipro River.

The finding generated excitement among archaeologists and the general public.

“Podil is very well studied, which is why everyone was very surprised when we first saw the fragments of the 12th century wooden fence and house," says Ivan Zotsenko, one of the archaeologists working on the spot.

More than a century after its discovery in a ninth century woman’s grave, an engraved ring has revealed evidence of close contacts between Viking Age Scandinavians and the Islamic world.

Excavators of a Viking trading center in Sweden called Birka recovered the silver ring in the late 1800s. Until now, it was thought that it featured a violet amethyst engraved with Arabic-looking characters. But closer inspection with a scanning electron microscope revealed that the presumed amethyst is colored glass (an exotic material at the time), say biophysicist Sebastian Wärmländer of Stockholm University and his colleagues.

An inscription on the glass inset reads either “for Allah” or “to Allah” in an ancient Arabic script, the researchers report February 23 in Scanning.

Scandinavians traded for fancy glass objects from Egypt and Mesopotamia as early as 3,400 years ago (SN: 1/24/15, p. 8). Thus, seagoing Scandinavians could have acquired glass items from Islamic traders in the same part of the world more than 2,000 years later rather than waiting for such desirable pieces to move north through trade networks.