Swedish Viking hoard: how the discovery of single Norman coin expands our knowledge of French history 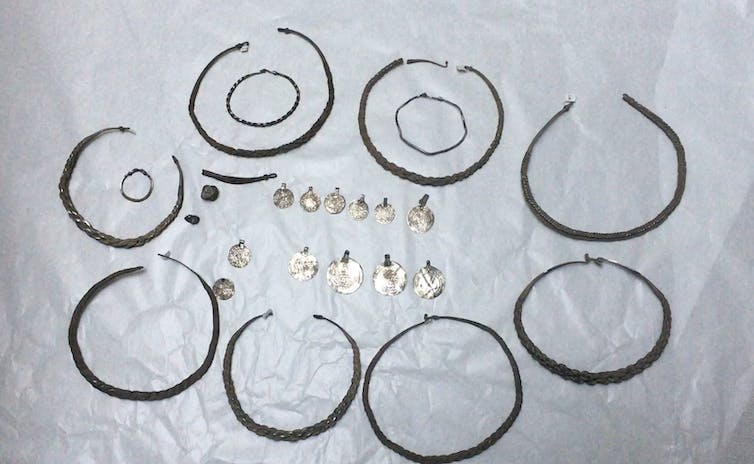 In the autumn of 2020, I was contacted by the field archaeology unit of the Swedish National Historical Museums, who are also known as the Archaeologists. They were excavating at a Viking-age settlement at Viggbyholm just north of Stockholm. During routine metal detecting of the site, they had located a very exciting find: eight silver necklaces and other silver jewellery along with 12 coins, everything delicately wrapped up in a cloth and deposited in a pot. In other words, a genuine Viking silver hoard.
As a professor in numismatics, the study of currency, I have spent my life becoming an expert in coins, so was called to help them learn more about this exciting discovery. It turned out to be a very interesting find. Most of the coins were the types that we usually see in Sweden: English, Bavarian, Bohemian (Czech) and Islamic coins as well as imitations of Islamic coins. But one of the coins was unusual.
Read the rest of this article...
Posted by David Beard MA, FSA, FSA Scot at 14:49 Here, the best preserved of the gold foil figures that were recently found at the site of Aska in Sweden. All the figures show couples embracing.
(Image credit: Björn Falkevik)
Archaeologists in Sweden have discovered nearly two dozen gold foil figures that have engravings of couples embracing each other.
The figures, which date back about 1,300 years, were found in the remains of a great hall on a platform mound, a human-made structure, at the site of Aska in Sweden. The researchers are still trying to piece together the broken figures to uncover more about them.
"Our best estimate is that we have 22 foil figures. The exact number is not quite clear because most are fragmented, and there is some uncertainty as to which fragments go together," Martin Rundkvist, an archaeology professor at the University of Lodz in Poland, wrote in a report recently uploaded to academia.edu, a site where researchers can upload papers. The report has not been published in a peer reviewed journal.
Read the rest of this article...
Posted by David Beard MA, FSA, FSA Scot at 18:00