The discovery of an Anglo-Saxon sword this summer was cause for great excitement at the Barrow Clumpexcavation. We were keen to learn as much as possible about this 6th-century weapon, although the degree of corrosion on the sword and the fact that it was contained within the remains of its wood and leather scabbard meant that we would need to use an x-ray machine to do so.

Being 85 cm in length, the sword was too large for our in-house x-ray facilities here at Wessex Archaeology, so the Army, through Captain Doe and Sergeant Potts, kindly offered to undertake the work using equipment based at a Field Hospital Unit in Aldershot. Transportation of the sword was closely supervised by our Conservator, Lynn Wootten, and the Project Manager for Barrow Clump, Phil Andrews.

HAS ONE OF HARALD BLUETOOTH’S FORTRESSES COME TO LIGHT?

In September 2014, archaeologists from the Danish Castle Centre and Aarhus University announced the discovery of a Viking fortress in a field belonging to Vallø Manor, located west of Køge on the east coast of Sealand. This was the first discovery of its kind in Denmark in over 60 years. Since then, archaeologists have been waiting impatiently for the results of the dating of the fortress. Now the first results are available, and they will be presented at a seminar at Aarhus University on 18 November.

“When the discovery was published back in September, we were certain that we had found a Viking ring fortress, but since then there have been intense discussions online and amongst archaeologists about whether we were right. Now we know without doubt that we have found a fortress from the 10th century,” says archaeologist Nanna Holm, curator of the Danish Castle Centre.


A few years ago, the oldest known piece of clothing ever discovered in Norway, a tunic dating from the Iron Age, was found on a glacier in Breheimen. Now about to be reconstructed using Iron Age textile techniques, it is hoped the tunic will inspire Norwegian fashion designers. 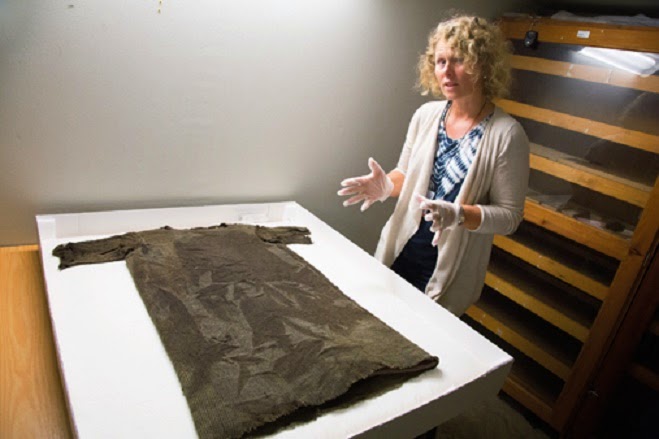 One of our aims in reconstructing the tunic is to learn more about how the textile  was made, how time-consuming it was to make, and how the wool was used,  explains Marianne Vedeler [Credit: Yngve Vogt]

There was huge excitement among archaeologists when, three years ago, the oldest piece of clothing ever discovered in Norway – a woollen tunic – was found by an archaeological expedition to the Lendbreen glacier in Breheimen National Park. As a result of climate change, the Lendbreen glacier, just like other glaciers throughout Norway, has in the past few years been retreating. The melting of the glaciers is constantly revealing ancient artifacts.

Derek McLennan found more than 100 objects in Dumfries in September
In addition to the pot, hoard includes jewellery, arm bands and silver ingots
The pot was investigated using a CT scanner at Borders General Hospital
It revealed silver broaches, gold ingots and ivory beads
Location of the find isn't being revealed until excavations have taken place


The mystery surrounding the contents of a Viking pot has been solved after researchers carried out a CT scan on the ancient artefact.
Archaeologists had been unable to open the pot to see what was inside, but its weight suggested it was full of treasure.
After undergoing a series of scans, the 1,200-year-old pot was found to contain up to at least five silver brooches and an ornate bead.


The recently discovered Viking Hoard in Dumfries is arguably the most significant archaeological find in Scotland in the last 100 years. Watch as we get the first glimpses of a pot which has lain undisturbed for over 1,000 years, courtesy of a CT scanning machine.
Posted by David Beard MA, FSA, FSA Scot at 14:11