A copper alloy piece of jewelry found at a Viking-age site in Denmark shows an animal figure with a beadlike chain around its neck.


Several pieces of Viking jewelry, some of which contain gold, have been uncovered at a farm site in Denmark that dates as far back as 1,300 years.

Although the Vikings have a popular reputation as being raiders, they were also farmers, traders and explorers, and the craftsmanship seen in this jewelry demonstrates their artistic skills.

Archaeologists working with volunteers used metal detectors to find the jewelry in different spots throughout a farmstead on Zealand, the largest island in Denmark. The remains of the site, which is now called Vestervang, date from the late seventh to the early 11th centuries.

Viking legends to retell stories of old at Jorvik Centre 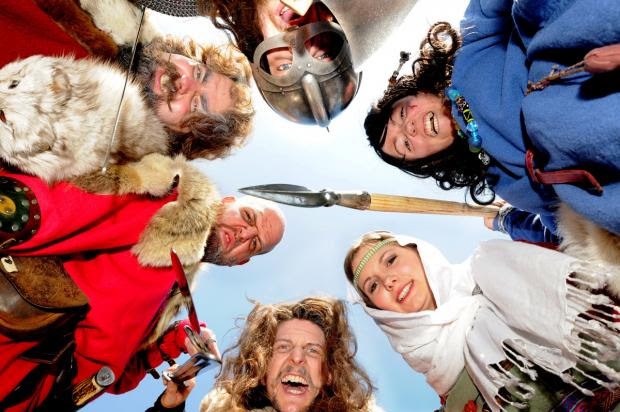 The gathering of legendary Viking heroes at the Jorvik Centre, clockwise from top, Eric Bloodaxe, warrior woman Lathgertha, Aud the Deep Minded, King Cnut the Great, King Harald Bluetooth and King Orry of Man
NINE heroes and a skeleton will take up residence at the Jorvik Viking Centre to give visitors an insight into the great deeds and battles of the past.
Legendary warrior and campaigner Eric Bloodaxe, warrior woman Lathgerda, warrior man Sweyn Forkbeard, adventurer Harald Hardrada, explorer Leif the Lucky and King Harald Bluetooth of Denmark are among nine big names from Viking and pre-Norman English history who will be among the star attractions of the centre’s Heroes exhibition.
They will answer questions from visitors and talk to them in between taking over its Twitter feed.
The exhibition will also include items to illustrate the lifestyle of a Viking hero, including a skeleton unearthed at Fishergate which may belong to a warrior killed at the Battle of Fulford in 1066 and several tenth century stones that may have covered a grave of a fallen hero or rich patron.
Read the rest of this article...
Posted by David Beard MA, FSA, FSA Scot at 12:54

A tantalizing hint of an ancient trading town 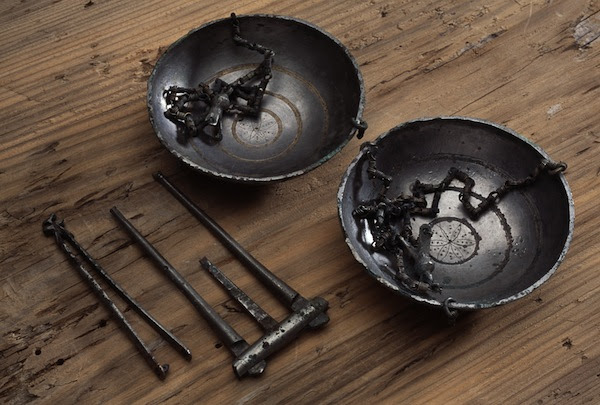 When archaeologists Geir Grønnesby and Ellen Grav Ellingsen found these and other artefacts during a dig in mid-Norway, they realized they had intriguing evidence of a Viking-age trading area mentioned in the Norse Sagas.
The finds came from two separate boat graves in an area in Nord-Trøndelag County called Lø, a farm in part of Steinkjer. The archaeologists, who both work at the Norwegian University of Science and Technology's University Museum, were there to conduct a routine investigation required because of an upgrade to Norway's main national highway, the E6.
But instead of a simple highway dig, the researchers found themselves with a potential answer to an unsolved puzzle about a mysterious Viking trading place that is named in ancient sagas, but that has never before been located.
Read the rest of this article...
Posted by David Beard MA, FSA, FSA Scot at 17:12


What do Angela Merkel and Harald Bluetooth, the Viking King of the Danes, have in common? Merkel is probably guilty of less pillaging than old Harald, but she participates in numerous political meetings throughout Europe – and so did Harald and the other Viking kings.
The kings were politicians who knew about political spin and who built up internal networks, explains Anne Pedersen, an archaeologist and curator at the National Museum of Denmark, which currently hosts a major exhibition about Vikings.
One of the main themes of the exhibition is power and international alliances:
”When the Vikings formed alliances, they did it much like we do today,” says Pedersen. “They made themselves visible on the political scene and they met with their peers at what we could call political summits where they formed networks and alliances.”
Read the rest of this article...
Posted by David Beard MA, FSA, FSA Scot at 10:17

It was a routine archaeological dig necessitated by the expansion of Norway’s main north-south highway the E6 just north of Trondheim, the country’s third largest city. But the finds surprised archaeologists from the Norwegian University of Science and Technology’s University Museum, who now believe they have solved a centuries-old puzzle posed in Norse sagas.

When archaeologists Geir Grønnesby and Ellen Grav Ellingsen found a silver button and a set of balance scales along with other artefacts during a dig in mid-Norway they realized they had intriguing evidence of a Viking-age trading area mentioned in the Norse Sagas.

The finds came from two separate boat graves in an area in Nord-Trøndelag County called Lø, a farm in part of Steinkjer.
“These finds got us thinking about the descriptions in the Sagas that describe Steinkjer as a trading place,” the researchers wrote of their findings in Vitark, an academic journal published by the University Museum. “The Sagas say that Steinkjer, under the rule of Eirik Jarl, was briefly even more important than Nidaros, before Olav Haraldsson re-established Nidaros as the king’s residence and trading city.”
Read the rest of this article...
Posted by David Beard MA, FSA, FSA Scot at 11:15