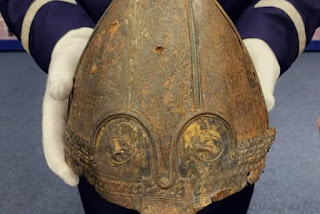 Romanian police specialising in heritage crimes on February 7 recovered a medieval helmet “of Viking origin” that disappeared a decade ago, and which they called “unique in Romania” and very rare in the rest of Europe in an announcement issued on Friday.
A Romanian expert in historical illustration, Radu Oltean, said the helmet dated from the 11th century. It was first discovered in 2010 during refurbishment work on the river Siret, in northeast Romania, but it was never handed over to the state preservation services and the authorities lost track of it.
The investigation that led to the recovery of the precious item started in December 2020, when police officers got information about its whereabouts.
The helmet “can be dated to between the 11th and the 13 centuries and represents a type of helmet most often found in the Baltics and Kiev Rus,” the police said, offering no additional information on how the helmet disappeared, or where it was kept.
Read the rest of this article...
Posted by David Beard MA, FSA, FSA Scot at 11:57