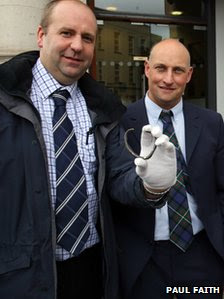 A man who found a dirty piece of metal in a field has discovered he is actually the lucky owner of a silver Viking ring.
David Taylor, from County Down, Northern Ireland, discovered a bracelet-shaped object while helping lift stones from a field.
His wife thought it was a bull ring and told him to throw it out.
A coroner's court has now found the ring to be treasure trove.
Almost 18 months ago, Mr Taylor noticed the strangely-shaped object lying on a stone in his brother-in-law's freshly ploughed field near Kircubbin on the Ards peninsula.
Read the rest of this article...
Posted by David Beard MA, FSA, FSA Scot at 16:28