MACABRE FINDS IN THE BOG AT ALKEN ENGE 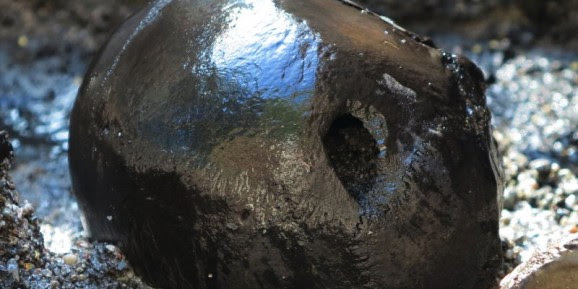 This is the first skull from the 2012 dig with a mortal wound caused by a spear or an arrow. Credit: Curator Ejvind Hertz, Skanderborg Museum

A FRACTURED SKULL AND A THIGH BONE HACKED IN HALF — FINDS OF DAMAGED HUMAN BONES ALONG WITH AXES, SPEARS, CLUBS AND SHIELDS CONFIRM THAT THE BOG AT ALKEN ENGE WAS THE SITE OF VIOLENT CONFLICT.

‘It’s clear that this must have been a quite far-reaching and dramatic event that must have had profound effect on the society of the time,’ explains Project Manager Mads Kähler Holst, professor of archaeology at Aarhus University.

For almost two months now, Dr Holst and a team of fifteen archaeologists and geologists have been working to excavate the remains of a large army that was sacrificed at the site around the time of the birth of Christ. The skeletal remains of hundreds of warriors lie buried in the Alken Enge wetlands near Lake Mossø in East Jutland, Denmark.