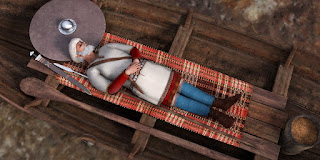 The oldest grave is from the 8th century. But why were they buried together?
[Credit: Arkikon]

In the second half of the 9th century, an important woman dies at the farm now known as Skeiet at Vinjeora, in central Norway. Her dress is fastened at the front with two large shell-shaped brooches of gilded bronze along with a crucifix-shaped brooch, made from an Irish harness fitting. She is then placed in a boat, about seven or eight metres long. Grave goods are also buried along with body, including a pearl necklace, two scissors, a spindle whorl– and a cow head.

So far, there is nothing extraordinary about this burial ritual. It is only when the boat is buried that the Vinjeora Vikings do something that will intrigue archaeologists more than 1000 years into the future.

Instead of digging a new grave for the woman, a boat grave from the 8th century is carefully excavated. This is a larger boat, probably between nine and ten metres long. It contains the body of a man buried with weapons. The boat with the woman is gently placed inside the man’s boat, and then they are both buried. Who were the two and why were they buried together, even though they died 100 years apart?