A unique runestone that is the first to mention Norway as a country and that documents the establishment of Christianity there, has been placed on a list of world heritage documents of international importance.

The “Kuli Stone” is the oldest object in the newly launched register of Norway’s list of documents to be included in UNESCO’s Memory of the World programme. The programme is an international register of documents that are seen as important aspects of our shared international heritage. The Norwegian version was launched on 8 February 2012 and lists documents that are especially important in Norway’s history and to its cultural heritage.

The text on the Kuli Stone is the first known occurrence and use of the term “Nóregi” – “Norway” – in the country it names. The stone has additional importance as it also dates to the establishment of Christianity in the country in a phrase that is often transcribed as:

“… twelve winters Christianity had been in Norway”.

Norse settlement may help us adapt to global changes


limate scientists have been examining the past environments and archaeological remains of Norse Greenland, Iceland and North Atlantic Islands for several years. They have been particularly interested in the end period of the settlements in the early part of the Little Ice Age (1300-1870 CE) and have been able to analyse how well the Norse responded to changes in  economy, trade, politics and technology, against a backdrop of changing climate.

They found that Norse societies fared best by keeping their options open when managing their long-term sustainability, adapting their trade links, turning their backs on some economic options and acquiring food from a variety of wild and farmed sources. Researchers say their findings could help inform decisions on how modern society responds to global challenges but also warns of inherent instabilities that do not directly link to climate.

Well-Red Vikings sail in for festival


YORK’S annual Viking invasion has created a combination between Norse history and a traditional fairy story.

A key event in this year’s Jorvik Viking festival saw youth and experience come together when Phillip Sherman, of Booster Cushion Theatre, and several young helpers performed Eric the Red Riding Hood at the Early Music Centre, in Walmgate, York.

The play involves the heroine of the story encountering a myriad of characters in a humorous retelling of Little Red Riding Hood.


THE annual Jorvik Viking Festival swung into action with a skirmish in York city centre.

Viking characters wearing battle attire took over Coppergate to help start the popular festival, which is expected to attract 40,000 people.

This year marks the 27th festival and will feature more than 80 events culminating in a ferocious battle before the Festival Of Fire climax featuring fire jugglers, a firework display and the burning of a 60ft-longship on Bustardthorpe Field at York Racecourse on Saturday.


Time Team has been thrown into disarray after Mary-Ann Ochota became the second presenter to leave the Channel 4 archaeological programme.

Mary-Ann Ochota, 30, who holds a master’s degree in archaeology and anthropology from Cambridge University, has left the show after a row with Prof Mick Aston, the archaeologist.
Her leaving the show comes after Prof Aston, 65, also quit the show after producers hired Ms Ochota, a former model, as the programme’s co-presenter with Tony Robinson.
Prof Ashton, who has been on the show for 19 years, said he had been left “really angry” by changes which led to the introduction of co-presenter and some archaeologists being axed.
Read the rest of this article...
Posted by David Beard MA, FSA, FSA Scot at 11:46

Reply to my complaint to Channel 4 concerning Time Team Changes


As expected, a wishy-washy response - but the more people who write in, the better!

Thank you for contacting Channel 4 Viewer Enquiries regarding TIME TEAM.

We are sorry to hear that you are unhappy with the new format of the show and that Prof. Mick Aston has decided to leave. We are saddened by Mick 's decision to leave, he has been a fantastic member of the Time Team team and we wish him well in the future.

Please be assured your complaint has been logged and noted for the information of those responsible for our programming.

Thank you again for taking the time to contact us. We appreciate all feedback from our viewers; complimentary or otherwise.

Please take the time to send your own comments to Channel 4.  Use the link here...


Mick Aston, the archeologist, has quit Time Team after producers hired a former model as the programme’s co-presenter.

The 65-year-old, who has been on the show for 19 years, said he had been left “really angry” by changes which led to the introduction of co-presenter Mary-Ann Ochota and some archaeologists being axed.

In an interview with the magazine British Archaeology, Prof Aston, the show’s former site director, said: “The time had come to leave. I never made any money out of it, but a lot of my soul went into it. I feel really, really angry about it.”

He was responding to changes first proposed by producers at Channel 4 in late 2010, which included a new presenter to join Tony Robinson and decisions to “cut down the informative stuff about the archaeology”.

Click here to contact Channel 4 to tell them what you think of their decision.
Posted by David Beard MA, FSA, FSA Scot at 13:14


The Vikings are both famous and notorious for their liking of beer and mead and archaeologists have discussed for years whether Eric the Red (ca 950-1010) and his followers had to make do without the golden drink when they settled in Greenland around the year 1,000:  The climate was mild when they landed, but was it warm enough for growing barley?


Researchers from the National Museum in Copenhagen say the answer to the question is ‘yes’. In a unique find, they uncovered tiny fragments of charred barley grains in a Viking midden on Greenland.

The find is final proof that the first Vikings to live in Greenland did grow barley – the most important ingredient in making a form of porridge, baking bread and of course in brewing beer, traditionally seen as the staple foods in the Vikings’ diet.

An axe head found in a garden in Gloucestershire, which was claimed to be of Viking origin, is an 18th Century woodworking tool, experts have said.

It was found in 2008 by Ian Hunter Darling under a hedge at his home in Slimbridge.

Slimbridge Local History Society who said last week it was Viking have now renamed it the "Slimbridge axe head".

A meeting about the find is taking place in Slimbridge on 21 February.


KEEN historians can learn more about the latest local archaeological excavations in Wirral at a talk being held next week.

The Friends of Greasby Library will host a lecture by local historian Rob Philpott who will describe how finds in a garden in Irby shed new light on settlements in the area from the Bronze Age to the arrival of the Vikings.

Roman pottery was discovered by chance, providing new evidence to link the earliest inhabitants of Wirral with later Scandinavian settlers.

And the beginnings of human settlement in Wirral have been dated to the Mesolithic period, following finds in the early 1990’s at Greasby. 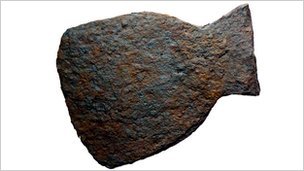 The wrought iron object, found in Slimbridge in 2008, has now been identified as being of Viking origin.
Historians say a band of Vikings sailed up the River Severn and fought against the Anglo-Saxons in 894 AD.
Archaeologists say where the axe head was found is where they could have tied up their ships.