Hundreds of costumed people carried flaming torches as they took to the streets of Shetland, in Scotland, during the annual Up Helly Aa festival to celebrate the island’s Norse heritage


A well-stocked grave of a blacksmith from the Viking Age is one of the best finds in Norway last year, according to Norwegian archeologists. 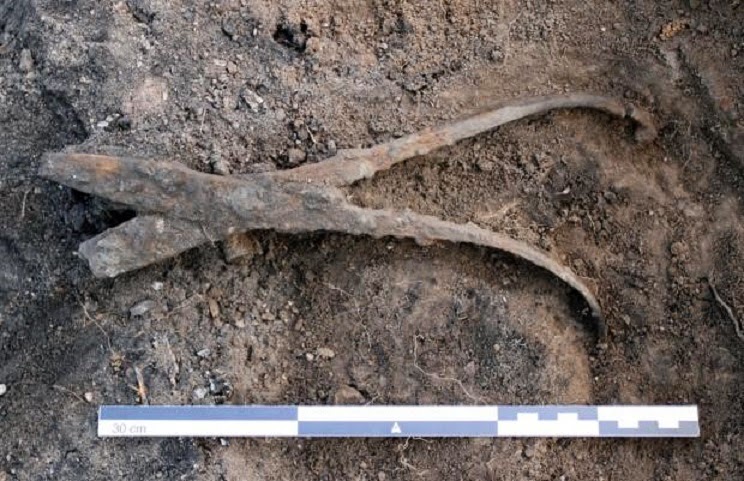 This was one of the tools found in the blacksmith's grave. The archeologists think  his contemporaries wanted to show how talented and versatile the blacksmith  was in his craft [Credit: Howell Roberts/University Museum of Bergen]

Leif Arne Nordheim, who lives in Sogndalsdalen on Norway’s west coast, decided to do something about some flagstones in his garden that irritatingly refused to lie flat. When he removed the stones he caught sight of something made of iron.

Brushing some of the objects off, he recognised them as a blacksmith’s hammer and tongs.

Nordheim contacted the regional culture authorities but had not dreamed that the artefacts dated back to the early Viking Age.

Viking Artefacts is an interesting blog run by Thomas Kamphaus.

He describes his interest as follows:

Well, I guess every man approching it's 40-ies has a right for developing a strange hobby. It thrills me more than the collecting of sugar sackets.

Seriously: I have always been attached to history, and in general the period from 500 - 1200. The Frankish/merovingian period and then the viking period. Collecting artefacts just have seemed to pop up out of the blue . The viking craftmanship in several to considered styles I find very acctractive. Compared to the number of Roman artefacts p.e. the vikings - although excavated intensively the last 25/35 years - always stayed a sort of elusive and mysterious to us what sets them apart of other cultures.

Mid-Norway Vikings among the first to sail to British Isles

Archaeological findings show that Vikings from mid- and western Norway were among the first to make the trip to the British Isles.

Vikings living in Trøndelag, a region in the middle part of Norway, were among the first in Scandinavia to travel west. A new analysis of burial sites in Trøndelag from the year 800 and later undertaken by researchers at the NTNU University Museum is giving us a clearer image of who decided to stay in Norway, and who left to travel to the British Isles.
The burials sites examined contained a lot more foreign artefacts than previously believed, many of which coincide the first known Viking raids in Lindisfarne, England in 793.
Read the rest of this article...
Posted by David Beard MA, FSA, FSA Scot at 19:08