Ravagers, despoilers, pagans, heathens - the Vikings are usually regarded as bloodthirsty seafaring pirates, whose impact on Europe was one of fear and terror. As they plundered the British Isles and the north Atlantic, these pagan invaders were seen by their Christian victims as a visitation from God.Yet the Vikings were also traders, settlers and farmers with a highly developed artistic culture and legal system. Their network of trade routes stretching from Greenland to Byzantium and their settlements, resulted in the creation of the Duchy of Normandy in France, the foundation of the Kingdom of Russia in Kiev and Novgorod as well as the development of Irish towns including Cork, Dublin and Limerick. This course will use recent findings from archaeology together with documentary records, to examine these varied aspects of the Viking world and to give a detailed and balanced view of this fascinating period. A wide variety of online resources including Google Maps and Google Earth as well as specific Viking web pages, are used in conjunction with text books and specially designed online interactive media to create an exciting insight into the world of the Vikings.


A pre-Viking woollen tunic found beside a thawing glacier in south Norway shows how global warming is proving something of a boon for archaeology, scientists said on Thursday.
The greenish-brown, loose-fitting outer clothing - suitable for a person up to about 176 cms (5 ft 9 inches) tall - was found 2,000 metres (6,560 ft) above sea level on what may have been a Roman-era trade route in south Norway.
Carbon dating showed it was made around 300 AD.
"It's worrying that glaciers are melting but it's exciting for us archaeologists," Lars Piloe, a Danish archaeologist who works on Norway's glaciers, said at the first public showing of the tunic, which has been studied since it was found in 2011.
A Viking mitten dating from 800 AD and an ornate walking stick, a Bronze age leather shoe, ancient bows, and arrow heads used to hunt reindeer are also among 1,600 finds in Norway's southern mountains since thaws accelerated in 2006.

In the middle of the Bronze Age, around 1000 BC, the amount of metal objects increased dramatically in the Baltic Sea region. Around the same time, a new type of stone monument, arranged in the form of ships, started to appear along the coasts. New research from the University of Gothenburg, Sweden shows that the stone ships were built by maritime groups.


The maritime groups were part of a network that extended across large parts of northern Europe. The network was maintained largely because of the strong dependence on bronze.
Archaeologists have long assumed that bronze was imported to Scandinavia from the south, and recent analyses have been able to confirm this notion. The distribution of bronze objects has been discussed frequently, with most analyses focusing on the links in the networks. The people behind the networks, however, are only rarely addressed, not to mention their meeting places.

Researchers say this crystal found at the Alderney shipwreck near the Channel Islands could prove that fabled Viking sunstones really did exist.

Ancient lore has suggested that the Vikings used special crystals to find their way under less-than-sunny skies. Though none of these so-called "sunstones" has ever been found at Viking archaeological sites, a crystal uncovered in a British shipwreck could help prove they did indeed exist.
The crystal was found in the wreckage of the Alderney, an Elizabethan warship that sank near the Channel Islands in 1592. The stone was discovered less than 3 feet (1 meter) from a pair of navigation dividers, suggesting it may have been kept with the ship's other navigational tools, according to the research team headed by scientists at the University of Rennes in France.
A chemical analysis confirmed that the stone was Icelandic Spar, or calcite crystal, believed to be the Vikings' mineral of choice for theirfabled sunstones, mentioned in the 13th-century Viking saga of Saint Olaf. 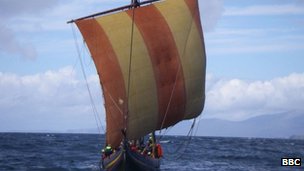 A clear view of the Sun was not necessary for Vikings to navigate, scientists believe

A crystal found in a shipwreck could be similar to a sunstone - a mythical navigational aid said to have been used by Viking mariners, scientists believe.
The team from France say the transparent crystal may have been used to locate the Sun even on cloudy days.
This could help to explain how the Vikings were able to navigate across large tracts of the sea - well before the invention of the magnetic compass.
However, a number of academics treat the sunstone theory with scepticism.

In 1592, a British ship sank near the island of Alderney in the English Channel carrying an odd piece of cargo: a small, angular crystal. Though cloudy and scuffed up from 4 centuries at the bottom of the sea, its precise geometry and proximity to the ship's navigation equipment caught the eye of a diver exploring the wreckage. Once it was brought back to land, a few European scientists began to suspect the mysterious object might be a calcite crystal, which they believe Vikings and other European seafarers used to navigate before the introduction of the magnetic compass.

A previous study showed that calcite crystals reveal the patterns of polarized light around the sun and, therefore, could have been used to determine its position in the sky even on cloudy days. That led researchers to believe these crystals, which are commonly found in Iceland and other parts of Scandinavia, might have been the powerful "sunstones" referred to in Norse legends, but they had no archaeological evidence to support their hypothesis—until now. 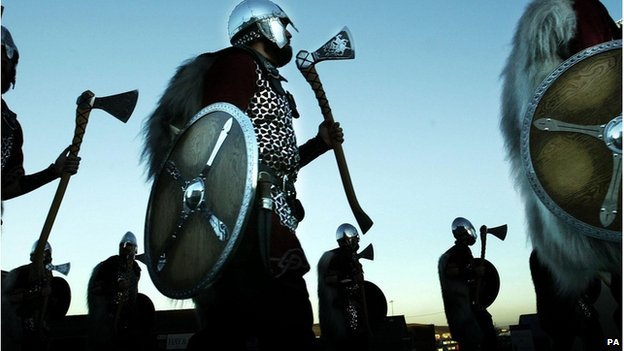 Some customers want to find Viking ancestry, but almost every Briton has some, say researchers
Scientists have described some services provided by companies tracing ancestry using DNA as akin to astrology.
Some test findings tell people that they have links to groups such as Vikings, to particular migrations of people and sometimes to famous figures such as Napoleon or Cleopatra
But researchers working with a campaign group say DNA tests cannot provide accurate information about ancestry.
Ancestry companies insist they are able to provide a valuable service.

Flight of the valkyrie: the Viking figurine that's heading for Britain 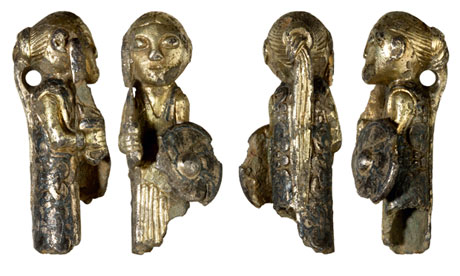 Four views of the valkyrie, the only 3D depiction from the Viking era known to exist
Photograph: Asger Kjærgaard/Odense Bys Museer

A little face peering up from a clod of frozen mud in Denmark has proved to be a unique find: the only known 3D Viking representation of a valkyrie.
The figurine, believed to date from about AD800, was found in December and has gone straight from conservation to display in the National Museum in Copenhagen. It will then be included in the exhibition on the Viking age that opens there in June and at the British Museum in 2014.
The legends of the valkyries – the ominous companions of the god Odin who descend on battlefields to choose which warriors will die – have been among the most enduring in Scandinavian folklore and literature. Later images, often inspired by Wagner's music, tend to be romantic creatures with flowing locks and voluptuous bodies.

This Image Released By History Shows Travis Fimmel As Ragnar (Center), In A Scene From ‘Vikings’, Premiering On March 3 On History. (AP)

Series Aims To Smash Some Stereotypes

ASHFORD, Ireland, March 2, (AP): If historical fiction guru Michael Hirst has his way, a legendary Viking raider named Ragnar soon will conquer North America on behalf of the History channel. History’s ambitious Dark Ages drama “Vikings,” debuted Sunday after five months of filming in Ireland, dramatizes the myth-cloaked story of Ragnar Lothbrok, leader of a Viking people typically depicted as horn-helmeted brutes. Here’s one pointed clue that “Vikings” aims to smash a few stereotypes along with English skulls: There’s not a horned head in sight because real Vikings never actually wore them. This lavishly produced nine-parter, the biggest production ever commissioned by History with a reported budget of $40 million, seeks to get viewers rooting for the Norsemen even as they butcher defenseless Christians and loot their way through Europe. With a cast including Gabriel Byrne, the series debuted on History Sunday at 10 pm.

“It’s always been in the background of my mind to do a Viking project,” said Hirst, whose reputation as a master of history-based drama has grown from his days as screenwriter of 1998’s film “Elizabeth” to his creation of the 2007-10 Showtime series “The Tudors” about the life, times and ill-fated brides of Henry VIII.
Speaking to The Associated Press during the final weeks of shooting, in a rain-soaked ash forest in the Wicklow hills south of Dublin, Hirst said he loved poring over the history of an ill-understood person or period, then weaving it into compelling entertainment.

Hirst, the showrunner and executive producer of “Vikings” as well as its sole writer, found working with 8th-century Scandinavian warriors a liberating experience because, while there’s such rich legend in Norse culture, there’s simply no written history from the illiterate Vikings’ point of view. “By definition, not as much is known about the Dark Ages. This is particularly true of the Vikings who were pagans and didn’t write anything down,” he said as, in the distance, actors on horseback worked on a scene of Ragnar taking his son on a mission to a magical tree, one facet of Norse religious belief. “Because not a huge amount is known, that gives me some liberty. But I like working from historical material. I always start projects by reading as much research as possible.”