A rare piece of Viking gold dating back more than a thousand years was discovered by an amateur with a metal detector in Northern Ireland, it was revealed.

The ingot is one of only a few nuggets known from Ireland, experts said Photo: PA


Tom Crawford was pursuing his hobby in farmland in Co Down last year when he found the small but precious ingot, which may have been used as currency during the 9th and 10th centuries. It is one of only a few nuggets known from Ireland, experts said.
Mr Crawford also uncovered a tiny silver ring brooch with unusual floral imprints, probably used for decoration by a man or woman during the Medieval period, a short distance away.
"It is all part of the big jigsaw of the history of this country," he told a Belfast inquest convened to establish if the find was treasure.
Read the rest of this article...
Posted by David Beard MA, FSA, FSA Scot at 12:19

Viking gold unearthed by treasure hunter in County Down 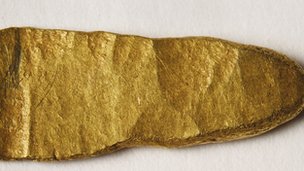 
A treasure hunter armed with a metal detector has unearthed a rare piece of Viking gold that is more than 1,000 years old.
Tom Crawford was sweeping farmland in County Down last year when he found the small ingot which may have been used as currency during the 9th and 10th centuries.
Experts said only a few such nuggets had been found in Ireland.
Close by, he found a tiny silver ring brooch dating from medieval times.
Read the rest of this article...
Posted by David Beard MA, FSA, FSA Scot at 12:16 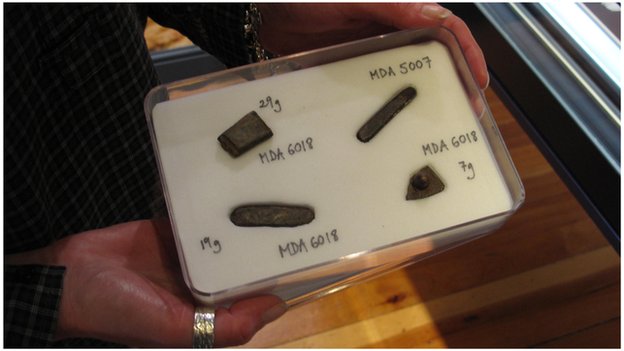 Three pieces of Viking silver dating back 1,000 years, discovered using a metal detector in the Isle of Man, have been declared treasure trove.
An inquest heard the three items, found by Seth Crowe in a field in Andreas in April, date back to between 930 and 1080 AD.
Archaeologists believe the two silver ingots and brooch fragment contain more than 60% silver.
Coroner of Inquests John Needham made the ruling at Douglas Courthouse.
Mr Crowe, 39, made the discovery having sought the permission of the landowner Leslie Faragher, some years ago.
Read the rest of this article...
Posted by David Beard MA, FSA, FSA Scot at 12:02 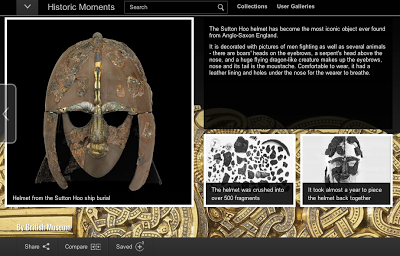 In 1939, just before the outbreak of the Second World War, an archaeologist named Basil Brown excavated the largest of 18 burial mounds in the grounds of a country house at Sutton Hoo in the east of England. What he discovered turned out to be a spectacular undisturbed burial.

Placed inside a vast ship, were the extraordinarily rich belongings of a high-ranking Anglo-Saxon man, possibly even a king... 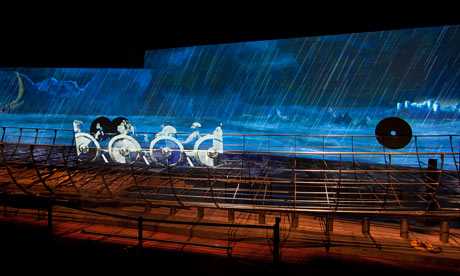 A violent animated backdrop to a reconstructed Viking warship

All around the hull of the longest Viking warship ever found there are swords and battle axes, many bearing the scars of long and bloody use, in an exhibition opening in Copenhagen that will smash decades of good public relations for the Vikings as mild-mannered traders and farmers.
"Some of my colleagues thought surely one sword is enough," archaeologist and co-curator Anne Pedersen said, "but I said no, one can never have too many swords."
The exhibition, simply called Viking, which will be opened at the National Museum by Queen Margrethe of Denmark on Thursday, and to the public on Saturday, will sail on to to London next year to launch the British Museum's new exhibition space. The Lofotr Viking Museum in Borg [Credit: MVFram]
Archaeologists from the science museum in Trondheim have located the foundations of two large houses from the Iron Age, close to one of the biggest burial grounds in Hallem, near Stiklestad in Trøndelag.
"This rarely happens in Norway, and it is completely unexpected" says archaeologist Marte Mokkelbost. The archaeologists have discovered two so-called "long houses" that confirm that Stiklestad was an area inhabited by people who were both wealthy and in power during the iron age.

The burial grounds at Stiklestad is one of the largest collection of cemeteries in Norway. The houses were found very close by, and one of the houses is more than 50 meters long and eight meters wide.


A group of history enthusiasts from across the north west have successfully rowed the biggest replica Viking ship in the world.
Despite many of them being novices, the group managed to get the 70-ton Dragon Harald Fairhair up to a respectable 3 knots on the fjords near Karmoy island in Western Norway.It's hoped the ship, which is named after the king who united the country more than 1,000 years ago, will retrace the route of the Vikings and visit Merseyside and the Isle of Man next year.

Trials are currently underway near the town of Haugesund where she was built. If they are successful, the vessel will embark on a major international voyage that could see her sail as far as New York.The ship was funded by a local businessman to learn more about ancient boat-building techniques and the Vikings themselves. It has been designed using a combination of archaeological evidence, details from folklore and local knowledge handed down over the generations.While it is mainly wind power that will get the Dragon between destinations, organisers need volunteers to row her in to and out of port.

(Courtesy Liina Maldre, University of Tallinn)The carefully stacked remains of 33 men were buried in the ship that brought them from Scandinavia to an Estonian island more than a century before the Vikings are thought to have been able to sail across such distances.


According to historians, the Viking Age began on June 8, A.D. 793, at an island monastery off the coast of northern England. A contemporary chronicle recorded the moment with a brief entry: “The ravages of heathen men miserably destroyed God’s church on Lindisfarne, with plunder and slaughter.” The “heathen men” were Vikings, fierce warriors who sailed from Scandinavia and bore down on their prey in Europe and beyond in sleek, fast-sailing ships. In the centuries that followed, the Vikings’ vessels carried them deep into Russia and as far south as Constantinople, Sicily, and possibly even North Africa. They organized flotillas capable of carrying warriors across vast distances, and terrorized the English, Irish, and French coasts with lightning-fast raids. Exploratory voyages to the west took them all the way to North America.

The Vikings’ explosion across Europe and Asia and into the Americas was the result of the right combination of tools, technology, adventurousness, and ferocity. They came to be known as an unstoppable force capable of raiding and trading on four continents, yet our understanding of what led up to that June day on Lindisfarne is surprisingly shaky. A recent discovery on a remote Baltic island is beginning to change that. Two ships filled with slain warriors uncovered on the Estonian island of Saaremaa may help archaeologists and historians understand how the Vikings’ warships evolved from short-range, rowed craft to sailing ships; where the first warriors came from; and how their battle tactics developed. “We all agree these burials are Scandinavian in origin,” says Marge Konsa, an archaeologist at the University of Tartu. “This is our first taste of the Viking era.”
Read the rest of this article...
Posted by David Beard MA, FSA, FSA Scot at 17:16 Vikings settled at the L'Anse aux Meadows site on the northern peninsula of Newfoundland. (CBC)

An American researcher has found new information about the movement of the Vikings in Newfoundland and Labrador which suggests they may have moved further inland than previously thought, and may have even travelled to other parts of Atlantic Canada.
Kevin Smith, chief curator at Haffenreffer Museum of Anthropology at Brown University in Rhode Island, says the Norsemen may have had contact with the Aboriginal Peoples a thousand years ago. He presented his findings in April at the annual meeting of the Society for American Archaeology.
According to Smith, recent geochemical tests of a red stone-like flint used by the Vikings found at the L'Anse aux Meadows site on Newfoundland's Northern Peninsula show the flint came from a distinct volcanic formation in Notre Dame Bay on the island's northeast coast.
Read the rest of this article...
Posted by David Beard MA, FSA, FSA Scot at 16:34

An image showing part of the Notre Dame Bay coastline. At the time the Norse journey took place this area was populated by the ancestors of the Beothuk people. The land is also heavily forested, a sharp contrast to the relatively more barren lands in the North Atlantic which the Norse had sailed to earlier. It was also rich in fish, birds and sea mammals and the temperature was warmer.
CREDIT: Kevin Smith.


Some 1,000 years ago, the Vikings set off on a voyage to Notre Dame Bay in modern-day Newfoundland, Canada, new evidence suggests.

The journey would have taken the Vikings, also called the Norse, from L'Anse aux Meadows on the northern tip of the same island to a densely populated part of Newfoundland and may have led to the first contact between Europeans and the indigenous people of the New World. Chemical analysis of two jasper fire starters unearthed at the site of L’Anse aux Meadows, a Norse site in the New World, suggests that the raw material to make them came from the Notre Dame Bay area of Newfoundland. “This area of Notre Dame Bay [is] archaeologically the area of densest settlement on Newfoundland, at that time, of indigenous people, the ancestors of the Beothuk,” said Kevin Smith of Brown University. Smith thinks it’s possible that the Norse and the ancestral Beothuk may have made contact when the Norse traveled from L’Anse aux Meadows. Other trips may have taken them to the Gulf of St. Lawrence, where they may have obtained butternut seeds, and the Canadian Arctic, where they may have traded with indigenous people. Norse sagas tell of hostile meetings with peoples of the New World.