Tom Williams, Project Curator: Vikings, British Museum
Scandinavians traditionally do rather well at the winter Olympics – for perhaps obvious reasons – but their Viking ancestors would have been no stranger to some of the delights of Sochi. Skis were used and valued in the North. Earl Rognvald I of Orkney boasted that (among several other skills) he could ‘glide on skis’, and the god Ullr was also associated with skiing. In fact, he has been taken as a sort of unofficial patron of the winter ski community, whose members often wear medallions depicting the god – there would no doubt have been a good number of Ullr talismans among the skiers in Sochi.
And, while the bob-sleigh may have been unknown, sledges of various kinds are certainly known from Viking burials, including a particularly beautiful example that was found in the famous boat burial from Oseberg in Norway.

Excavations at the Domskirke in Ribe, Denmark began in 2008 and analysis of the results lend new insight into early Christianity, where this may have been one of the first places in the country where a small enclave of Christians worshipped and died.

Studies have now shown that there may have been Christian Vikings in Ribe around AD865. Denmark officially became a Christian country around the year AD965 when Harald Bluetooth announced his deed on the Jelling stone (see below). It now seems possible that 100 years before this countrywide conversion, Christian Danish Vikings were living, dying and being buried in Ribe.

In the excavations conducted by the Southwest Jutland Museums between 2008-2012 around the Domskirke, the archaeologists found over 70 burials from the earliest period of activity. The tombs provide a unique insight into the early Christian burial customs, and have become be a major source of debate in Denmark.
Read the rest of this article...
Posted by David Beard MA, FSA, FSA Scot at 13:10

The mystery of a 900-year-old Viking message has finally been solved. Cryptologists, put down your cipher devices, because the formerly incomprehensible code that's been haunting your dreams reads in part: "Kiss me."

A runic artifact that reads: "Kiss Me". Photographer: Jonas Nordby.
The baffling Jötunvillur code, which dates back to as early as the 9th century, has popped up in over 80 different Norse inscriptions, puzzling runologists (those who study the Viking rune alphabets) for some time. That is, until Jonas Nordby, a runologist from the University of Oslo, valiantly broke the code, realizing a simple pattern amongst the writings.
"For the jötunvillur code, one would replace the original runic character with the last sound of the rune name," he explained in an interview with Forskning.no. "For example, the rune for 'f', pronounced 'fe,' would be turned into an 'e,' while the rune for 'k,' pronounced 'kaun,' became 'n.'"
Read the rest of this article...
Posted by David Beard MA, FSA, FSA Scot at 15:47


Why did Vikings sometimes use codes when they wrote in runes? Were the messages secret, or did they have other reasons for encrypting their runic texts? Researchers still don’t know for sure.

A rather forthright message written in code: “Kiss me” is etched into a piece of bone found in Sigtuna in Sweden, dating to the 12th or 13th century. The code is in cipher runes, the most common code known from medieval Scandinavia. This variety is called ice runes [Credit: Jonas Nordby]


A runic code called jötunvillur has finally been decrypted. It just might help solve the mystery of the Vikings’ secret codes.

Two men, Sigurd and Lavrans, carved their names both in code and in standard runes on this stick, dated from the 13th century and found at the Bergen Wharf. This helped researcher Jonas Nordby crack the jötunvillur code. (Photo: Aslak Liestøl/Museum of Cultural History, University of Oslo)

Why did Vikings sometimes use codes when they wrote in runes? Were the messages secret, or did they have other reasons for encrypting their runic texts? Researchers still don’t know for sure. 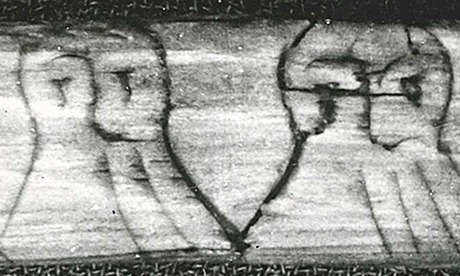 Mystery nosed out ... Fragment of wooden stick with runic inscription on one side found at the old wharf in Bergen. The text is written using a code where the number of 'hairs' in the beards of each face indicate the position of the character in the runic alphabet. Museum of cultural history, University of Oslo. Aslak Liestol Photograph: Aslak Liestol/Museum of Cultural History, University of Oslo
An ancient Norse code which has been puzzling experts for years has been cracked by a Norwegian runologist - to discover the Viking equivalent of playful text messages.
The mysterious jötunvillur code, which dates to 12th or 13th-century Scandinavia, has been unravelled by K Jonas Nordby from the University of Oslo, after he studied a 13th-century stick on which two men, Sigurd and Lavrans, had carved their name in both code and in standard runes. The jötunvillur code is found on only nine inscriptions, from different parts of Scandinavia, and has never been interpreted before.
Read the rest of this article...
Posted by David Beard MA, FSA, FSA Scot at 10:32

OSLO, NORWAY—Runologist K. Jonas Nordby of the University of Oslo has deciphered the ancient Norse jötunvillur code, found on nine known inscriptions. Nordby used a thirteenth-century stick on which two men had carved their names, Sigurd and Lavrans, in standard runes and in the code. The confusing system requires that the reader have a good working knowledge of the runes in order to swap them out with others for sounds in their names. “What if codes were used like a game, playing with a system? With jötunvillur, you had to learn the names of runes, so I think codes were used in teaching, in learning to write and read runes,” he told The Guardian.

Jutting out from the edge of the Lake District and home to a proud industrial heritage, the Furness Peninsula seems to weld together many of our contrasting ideas about what Englishness means. To the north lies some of the country’s most outstanding areas of natural beauty; at the southern tip sits a shipyard where nuclear submarines for the Royal Navy are built. The area is defined by working-class values, post-industrial decline and 21st-century regeneration.

By uniting these elements, Furness appears to epitomise many of the complex ideas behind a notion of England that is both very modern, and very old.

But this, it turns out, is far from the complete picture. In a recent project, historians have begun to scratch the surface of a much earlier period in Furness’ past – one that not only changes what we know about its history, but also raises questions about these very ideas of Englishness itself.

Was Charlemagne a Mass Murderer? When he heard of this, the Lord King Charles rushed to the place with all the Franks he could gather on short notice and advanced to where the Aller flows into the Weser. Then all the Saxons came together again, submitted to the authority of the Lord King, and surrendered the evildoers who were chiefly responsible for this revolt to be put to death – four thousand five hundred of them. The sentence was carried out.

This entry for the year 782 in the Royal Frankish Annals is one of the most debated topics of Charlemagne’s reign. Did the ‘Massacre of Verden’ actually happen with 4500 people being killed in a single day? Was the Carolingian ruler (and later Holy Roman Emperor) justified in his actions? Or was this a brutal act of ethnic-cleansing that has left a terrible mark on the man who is credited with re-establishing Western Europe after the fall of the Roman Empire?

The Oxford Experience Summer School offers a number of one-week courses in archaeology as part of its programme.

Participants live in Christ Church - the largest of the Oxford Colleges - and take their meals in the Great Hall, which is the hall that inspired the Hogwarts Hall in the Harry Potter films.

Courses are limited to a maximum of twelve participants and tend to fill up rather quickly, so early application is advised.

You can find a list of this year's archaeology courses here..

Now is the time to start thinking about training digs for the summer.

If you are planning to go on a training dig, take a look at our list here...

If you would like to submit details of a training dig (or any other archaeological event), please use the contact form here...