The mystery of what happened to Greenland’s Norse population is one step closer to being solved, as new evidence suggests that the colony did not die out because its inhabitants were unable to adapt to their new environment.

The first Viking settlers arrived in c.AD 1000, and over time their population swelled to around 3,000 people. By the 15th century, however, they had vanished, with no explanation provided by contemporary written sources. This disappearance has long been debated by archaeologists, with some suggesting that the farming communities were defeated by climate change, which made it difficult to cultivate cereal crops for bread and beer, and limited wild plant resources.

Research published in the Journal of the North Atlantic suggests that the Norse colonists simply adapted their diet to cope with their new circumstances, developing a taste for seals.

A team of Danish and Canadian archaeologists have examined 80 skeletons excavated from Norse settlement sites in western and south-western Greenland. Isotope analysis revealed that the population adopted an increasingly marine-based diet, with 50%-80% of their food consisting of seal meat by the 14th century.

How harmful to a person’s health were the indoor conditions in Danish Viking Age houses?

We do not have much direct evidence describing that. But we know that currently exposure to smoke from the solid fuel used for cooking and heating in open fireplaces in Third World homes is in harmful levels. It is among the top ten global risks for mortality and lost years of healthy life. Fuel smoke accounts for about 3 % of the global burden of diseases, mainly for women and young children, e.g.; lower respiratory infections, pulmonary diseases, and lung cancer

Where were the Viking brew houses?


We have been studying traditional malting and beer brewing techniques for 15 years.
Graham is a craft brewer with 30 years’ experience of making beer from the grain.
Merryn is an archaeologist, completing her M.Phil ‘Barley Malt & Ale in the Neolithic’ at
the University of Manchester in 1999 and continuing research independently since then.
The brewing of ale is a skilled craft that has hardly changed over the millennia.  For the
last few years we have been looking into the potential archaeological evidence for the
brewing of ale at Viking sites.

Report: Vikings ‘abandoned Greenland due to loneliness and limited foods’


Researchers have a new theory on why the Vikings ultimately decided to abandon Greenland after five centuries. The news comes via a report recently published in the Journal of the North Atlantic, in which scientists claim that the infamous group of explorers may have simply got tired of the isolation of Greenland and having to survive almost exclusively on seal meat.

The theory is the result of a new Danish-Canadian project, for which scientists carried out isotope analysis on the bone remnants of Vikings and the animals that were living beside them.

Longstanding theories as to why the Vikings chose to leave the icy landmass suggested that starvation amid a mini ice age and ongoing battles with the local Inuit population were the central causes of the uprooting.

Research leader Niels Lynnerup, an anthropologist from the University of Copenhagen, told the media that he believes they may have had a wealth of food, but added, “perhaps they were just sick and tired of living at the ends of the earth and having almost nothing but seals to eat,” The Daily Mail reports.

We think we understand the Vikings and their ways as a culture of warriors and pirates. The Vikings plagued the coast of early medieval Britain, robbing from monastic and secular sites until they finally set up permanent residence in the Danelaw.

In reality, however, the Vikings inhabited a nebulous dichotomy between violent warrior and peaceful merchant.

Yet these views of the Norsemen originate from sources outside Viking culture, they originate from the victims, such as the monasteries that were attacked. As a result, our view of the Viking world is rarely from the perspective of people who were part of it. In a series of lectures to Cornell University, delivered in September 2012, Professor Neil Price of Aberdeen University attempts to bridge this gap and get inside the Viking mind.

Professor Price puts forward the argument that stories are at the heart of the Viking consciousness and that the Vikings perceived the world as a series of interconnected stories passed orally and lived out day to day. What modern scholars interpret as “Norse myths”, i.e. tales of the gods collected in what we call the Prose and Poetic Edda, were not only stories to entertain on the long Scandinavian nights, they were also a very real part of the nature of the world.

Dig will root out secrets of Viking past

A two-mile stretch of land between Arrochar and Tarbet could hold vital clues to the Vikings' occupation of Scotland.

An archaeological project hopes to shed new light on how the Vikings used the narrow isthmus between Loch Lomond and Loch Long to expedite their notorious plundering exploits.

The fierce Norsemen are said to have dragged their boats across the isthmus - now the route of the busy A83 - to raid the rich Lomond settlements before encountering defeat at the Battle of Largs in 1263.

Now an appeal has gone out for volunteers to come forward and help archaeologists in their quest for Viking clues.

Until now, many experts had assumed that the cooling of the climate and the resulting crop failures and famines had ushered in the end of the Scandinavian colony. But now a Danish-Canadian team of scientists believes that it can refute this theory of decline.
Here, archaeologists dig up skeletons in Greenland.


For years, researchers have puzzled over why Viking descendents abandoned Greenland in the late 15th century. But archaeologists now believe that economic and identity issues, rather than starvation and disease, drove them back to their ancestral homes.

On Sept. 14, 1408, Thorstein Olafsson and Sigrid Björnsdottir were married. The ceremony took place in a church on Hvalsey Fjord in Greenland that was only five meters (about 16 feet) tall.

It must have been difficult for the bride and groom to recognize each other in the dim light of the church. The milky light of late summer could only enter the turf-roofed church through an arched window on the east side and a few openings resembling arrow slits. After the ceremony, the guests fortified themselves with seal meat.

The status of Viking women may be underestimated due to the way we interpret burial findings.

“To assume that Viking men were ranked above women is to impose modern values on the past, which would be misleading,” cautions Marianne Moen. She has been studying how women’s status and power is expressed through Viking burial findings. Her master’s thesis The Gendered Landscape argues that viking gender roles may have been more complex than we assume.

Exploring new perspectives of Viking society is a theme which also will be the focus of the forthcoming Viking Worlds conference in March 2013, where Moen is a member of the organising committee.

Our assumptions of gender roles in viking society could skew the way we interpret burial findings, Moen points out. She uses the 1904 excavation of the Oseberg long boat to illustrate the point. Rather than the skeleton of a powerful king or chieftain, the ship surprisingly contained two female skeletons. 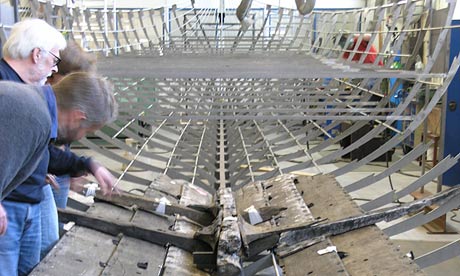 Timbers of Roskilde 6 Viking warship being fitted into the steel frame for display in Copenhagen
and at the British Museum.
When the sleek, beautiful silhouette of Roskilde 6 appeared on the horizon, 1,000 years ago, it was very bad news. The ship was part of a fleet carrying an army of hungry, thirsty warriors, muscles toned by rowing and sailing across the North Sea; a war machine like nothing else in 11th-century Europe, its arrival meant disaster was imminent.

Now the ship's timbers are slowly drying out in giant steel tanks at the Danish national museum's conservation centre at Brede outside Copenhagen, and will soon again head across the North Sea – to be a star attraction at an exhibition in the British Museum.

The largest Viking warship ever found, it was discovered by chance in 1996 at Roskilde. It is estimated that building it would have taken up to 30,000 hours of skilled work, plus the labour of felling trees and hauling materials. At just over 36 metres, it was four metres longer than Henry VIII's flagship Mary Rose built 500 years later, and six metres longer than the Viking ship spectacularly recreated as Sea Stallion, which sailed from Scandinavia around Scotland to Dublin in 2007.