"From the fifth century, for 1,000 years, York was the northern city,” says Natalie McCaul, the curator of archaeology at the museum doing this history justice several centuries later.
“It was the place from which the powerful ruled. Kings ruled the country from here. Archbishops led the church from here.“Traders and merchants made fortunes. This exhibition will look at how York became so powerful, and the men and women who made it that way.”

Started with a film triggered by a coloured bookmark – one for adults, one for kids – this chronological run-through is divided into eight periods.They include Anglian and Viking throwbacks, the House of York and the Tudor ages, symbolised by glitzy objects such as theEsrick Ring and theMiddleham Jewel, and depicting the likes of Richard III, Henry IV and William the Conqueror in cartoon form.
Read the rest of this article...
Posted by David Beard MA, FSA, FSA Scot at 18:11

To claim someone has 'Viking ancestors' is no better than astrology 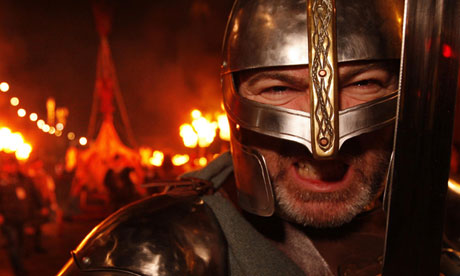 Last week we were told that Eddie Izzard is a Viking descendant on his mother's side and an Anglo-Saxon on his father's. Photograph: Danny Lawson/PA

You may have missed the latest genetic discovery. As reported by The Daily Telegraph on Friday: "One million British men may be directly descended from the Roman legions". The story reappeared on Sunday, at the Who Do You Think You Are – Live event at London's Olympia, when it was repeated by Alistair Moffatt, the managing director of BritainsDNA, the company behind the claims.
Such stories are becoming increasingly common in newspapers, on television and radio. Last week on the BBC miniseries Meet the Izzards we were told that Eddie Izzard is a Viking descendant on his mother's side and an Anglo-Saxon descendant on his father's. Last year the Observer reported that Tom Conti has Saracen origins and is a relative of Napoleon Bonaparte.

Researcher Ingrid Ystgaard  from the Norwegian University of Science and Technology has studied the weapons found in graves and examined the battle techniques they would best suit during the important transition from the early to the late Iron Age in Norway around 500 AD.

A time of conflict

The Western Roman Empire was collapsing, and warfare engulfed Europe, major alliances were splintered and smaller bands of men started vying with one another. Ystgaard  feels it may be significant that the battle axe became a favoured weapon during this time.
Ystgaard also studied the simple stone fortifications (Bygdeborgen ) built for protection on hilltops or other sites that were easy to defend. Relatively common, they were maintained between 400 AD to 600 AD and then, over the course of a single generation, abandoned and left to crumble.
The researcher wondered why people gave up fortifications that had been used for more than six generations and feels she has found one answer in some 100 weapon graves in mid-Norway dating to this turbulent and violent period.
Read the rest of this article...

ARCHI, the online searchable archaeological database, has added a new feature that allows users to add sites to their world-wide database.

The online form is easy to use and should prove to be an extremely useful addition to this site.

You can find the online form at:

The Oxford Experience is offering a number of archaeology courses this summer.

Each course lasts for one week and participants stay in the 16th century college of Christ Church.

The courses offered are:

There are still a few places available on the Easter archaeological study tour to Yorkshire.

The Study Tour is organized by EMAS, the University of London Extra-Mural Archaeological Society, and is open to any one.

Secrets of York’s Viking heritage to be unveiled at festival

Vicky Harrison, collections manager at York Minster, with the Horn of Ulf, a ceremonial drinking horn

Secrets of York’s Viking heritage - including a ceremonial horn which was pivotal to the life of the city’s most famous landmark – will be unveiled over the half-term holiday.
As part of the 2013 Jorvik Viking Festival, teams at York Minster will host a series of events next week looking at why the Norse raiders were originally drawn to the city, using archaeological discoveries to shed fresh light on a key chapter in the city’s history.
The Children’s Chapel at the Minster will be the scene for Viking-themed family activities next Wednesday, Thursday and Friday between 10am and 3pm.
Read the rest of this article...
Posted by David Beard MA, FSA, FSA Scot at 15:39 ARCHAEOLOGISTS have found evidence of a previously-unknown settlement below York Minster, dating back more than 1,000 years.
Experts working at the Minster say the finds – including a ninth-century coin – help to plug a gap in York’s known history, between the departure of the Romans in the fifth century and the arrivals of the Normans in 1066.
The period is referred to as the Dark Ages due to the lack of knowledge about the time, and although Viking finds have increased awareness of York history from 866 onwards, broader understanding is scarce.
Now, a team from York Archaeological Trust working in a pit below the Minster say they have made priceless finds, including evidence of a local mint. 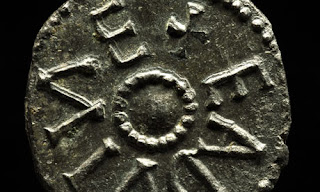 The rare Anglo-Saxon coin found at the minster shows that the city had its own mint [Credit: Maev Kennedy/Guardian]

The recent excavation of a pair of Viking feet and a tiny silver Anglo-Saxon coin may lack the glamour of the discovery of the last Plantagenet, but it has shone a light on one of the least known periods in the long history of York Minister: the centuries between the fall of Roman empire and the coming of the Vikings, in AD866.

The coin, no bigger than a 5p piece, is a sceat, minted in York. It is in such good condition that experts at the British Museum first thought it was a Victorian fake. So good is its state of repair that marks are legible identifying the maker as Eadwine, who also minted coins for the Northumbrian court. It proves that York had enough status and wealth in the early 9th century to support its own mint.The coin is so pristine it was probably never circulated, so the archaeologists surmise that it was dropped accidentally almost as soon as it was struck, and that the mint must therefore have been very close to the site of the present enormous medieval church, which was built over layers of earlier foundations, some of them Roman.

Over the years, there has been much speculation regarding whether Irish monks may have travelled north across the sea to the Faroe Islands long before the Vikings ever arrived there.

However, despite the best efforts of scientists, researchers and archaeologists, nothing was uncovered that could prove the existence of settlers on the Faroes before the year 800 AD.
Until now!

Scientists from Aberdeen University in northeast Scotland have found something exciting in early Faroese pollen samples that gives them a reason to rethink Faroese prehistory: cereal pollen.
Kevin Edwards, a professor of physical geography and archaeology at Aberdeen University, tells ScienceNordic about the work:
”One of the main problems with cereal pollen is that it is produced in tiny quantities. Cereal pollen grains are also very large, and that means they don’t spread far with the wind. That’s why it’s so important to find.”
Now they have found cereal pollen in the early samples from the Islands there is just one problem: the soil where they found it is far from ideal for accurate pollen analysis, so they must try to discover more, but given the rarity it will be difficult.