A Danish Viking burial site contains a buckle that may have come from Ireland or Scotland.

The history of this bronze buckle might share some light on just how “global” the Vikings were. (Photo: Ernst Stidsing)


At just 6 cm in diameter, this little buckle is causing quite a stir in archaeological circles.

The small gilt bronze buckle once held a petticoat together and was buried between 900 and 1,000 years ago with its female owner in a Viking grave in west Denmark.

It is a rare find for Denmark, as the buckle appears to have come from Scotland or Ireland.
But just to determine this has been quite a journey, says project manager and archaeologist Ernst Stidsing, from the Museum East Jutland, Denmark.

The find is described in a collection of articles "Dead and buried in the Viking Age", published by Saxo Institute at the University of Copenhagen, Denmark.

Lost forest language to be taught in Swedish preschool

Elfdalian, a rare Viking language, is getting a revival after local politicians agreed to build a new preschool in Älvdalen, the small forest community that still uses it.


While its name might conjure up images from Game of Thrones or Lord of the Rings, Elfdalian is a real language that is believed to date back to Viking times and is in danger of becoming extinct.
Fewer than 60 children can currently speak Elfdalian, but politicians in the remote town of Älvdalen in central Sweden have this week voted to try to save it, by setting up a new preschool where it will be taught. Pupils who begin learning the language aged six will keep it as part of their curriculum until they turn 18.
"The decision was made yesterday that they will start to build the preschool," Lotte Andersson, a press spokesperson for the municipality, confirmed to The Local on Wednesday. 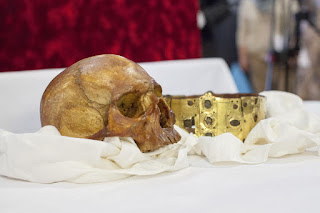 Experts were able to match the runes to a 1767 drawing.
Photo: Lisbeth Imer, National Museum of Denmark

A rune stone likely dating back to around the year 1000 has been discovered in northern Denmark, some 250 years after it was last seen, the National Museum of Denmark said on Thursday.


Researchers had long since given up hope of ever recovering the lost Viking artefact when a farmer contacted Museum Thy in November to say that he had a large stone with some stripes on it in his back yard that he thought experts might want to see.
The museum’s archaeologist Charlotte Boje Andersen and runologist Lisbeth Imer from the National Museum visited the farmer this week and were absolutely shocked by what they found.

A cross discovered by an amateur Danish archaeologist may "change history" according to an expert, who believes the cross may date from before Christianity is thought to have reached Denmark.

An amateur archaeologist on the island of Funen made a startling discovery last week – a necklace resembling Jesus on the cross. But after posting a picture of the discovery on Facebook, Dennis Fabricius Holm quickly found that the item may have a lot more significance than he had initially thought.

“I finished work early last Friday, so I decided to spend a couple of hours searching with my metal detector,” Holm told national broadcaster DR.

“Suddenly I hit upon something,” continued Holm. “Ever since I turned over the clump of earth and saw the cross, I’ve been unable to think of anything else.” A gilt bronze buckle dating to more than 1,000 years ago has been found buried with a woman in a Viking grave in west Denmark. Determining the origin of the 2.4-inch-wide buckle has been a major challenge, according to archaeologist Ernst Stidsing of the Museum of East Jutland. Stidsing sent photos of the buckle to a colleague who was stumped and who sent them on to other experts. They agreed that it was from the British Isles, but were divided on exactly which part—some said Ireland, others the south of Scotland. They agreed, however, that the disc was originally a decoration on a religious box and was only used as a buckle after it was stolen.

Norwegian researches opened a tomb containing the remains of descendants of Viking leader Rollo in Normandy, France on Monday with the aim of putting an end to a centuries-long debate: was Rollo Danish or Norwegian?


Norwegian researchers opened a tomb containing the remains of descendants of Viking leader Rollo in Normandy, France on Monday with the aim of putting an end to a centuries-long debate: was Rollo Danish or Norwegian?
“We have worked on investigating this for about seven years, so to finally obtain material that we can test for DNA is huge,” historian Sturla Ellingvåg told NTB.


The remains of an Anglo-Saxon island have been uncovered in one of the most important archaeological finds in decades. 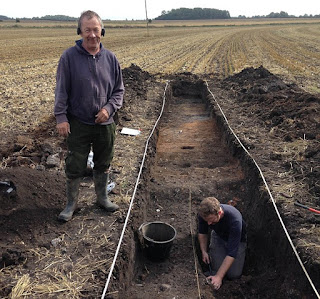 The island which was home to a Middle Saxon settlement was found at Little Carlton near Louth, Lincolnshire by archaeologists from the University of Sheffield.

It is thought the site is a previously unknown monastic or trading centre but researchers believe their work has only revealed an enticing glimpse of the settlement so far.