We are looking for people working, studying or volunteering in the archaeological world to participate with us in a “Day of Archaeology” in July 2016. The resulting Day of Archaeology website will demonstrate the wide variety of work our profession undertakes day-to-day across the globe, and help to raise public awareness of the relevance and importance of archaeology to the modern world. We want anyone with a personal, professional or voluntary interest in archaeology to get involved, and help show the world why archaeology is vital to protect the past and inform our futures.

A Viking tomb in Denmark contains the rare remains of two men and a woman and offers more evidence of an international Viking culture.


A tomb discovered as part of a large Viking burial ground in south west Denmark contains the remains of a Viking noble or at least a highly distinguished person.
The grave was discovered in 2012 when engineers were building a highway, and it has since been identified as a unique Viking tomb known as a ‘dødehus’ [death house].  The building measures four by thirteen metres and contained three graves dating back to 950 CE.
Read the rest of this article...
Posted by David Beard MA, FSA, FSA Scot at 11:41

The 'forgotten' Viking fortress is one of five in Denmark. Photo: Mathias Løvgreen Bojesen/Scanpix

The historic discovery two years ago of a fifth Viking ring fortress was celebrated in grand style on Monday.


After lying forgotten for over 1,000 years, archaeologists uncovered a circular Viking fortress just west of the Zealand town of Køge in a find that shook up popular knowledge of the Viking Age.
Researchers had long assumed that the four previously discovered Viking fortresses were all that remained in Denmark and the September 2014 find was the first of its kind in 60 years.
On Monday, Queen Margrethe officially unveiled the fortress, dubbed Borgring. It opens to the general public on Wednesday, June 1st and is expected to draw upwards of 30,000 visitors per year.

Three amateur archaeologists have uncovered the largest ever trove of Viking gold in Denmark.

The three archaeologists, who call themselves Team Rainbow Power, found seven bracelets from the Viking Age in a field in Vejen Municipality in Jutland. The bracelets, six gold and one silver, date to around the year 900.
With a combined weight of around 900 grammes, the find is the largest ever discovery of Viking gold in Denmark.
Team Rainbow Power member Marie Aagaard Larsen said that she had only been on the field for around ten minutes before striking gold – literally.


Denmark's main museum says amateur archaeologists have found seven bracelets - one of silver and six of gold - which are considered to be the largest Viking-era gold find in Denmark. 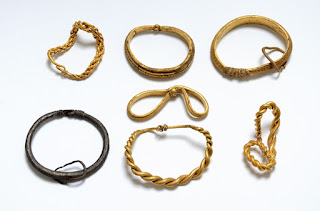 National Museum of Denmark spokesman Peter Pentz says finding one "is huge but it is something special to find seven."Pentz says the bracelets weighing a total of almost one kilogram (2.2. pounds) were discovered last week near Vejen in western Denmark by people using metal detectors.He said in a statement Thursday the bracelets could have been used by a Viking chieftain to reward faithful followers. They likely were part of a treasure that includes a gold chain found in the same field in 1911.

Viking Gold Hoard at the End of the Rainbow It really feels as if we found  gold at the end of the rainbow, tells one of the amateur archaeologists, who last week found the largest treasure of Viking gold ever discovered in Denmark

Last week three amateur archaeologists found seven bangles from the 10thcentury in a field near Vejen in Jutland. The amazing thing is that six of the seven are made of gold, while the last is of silver.
– When we discovered the first ring, we really felt that we had found the gold at the end of the rainbow. And then more surfaced; it was almost unreal, says Marie Aagaard Larsen, who together with her husband Christian Nedergaard Dreiøe and their common friend Poul Nørgaard Pedersen is one of the three happy finders.
It took only about ten minutes to find the first three bangles; afterwards a phot was sent quickly to the local museum in Sønderskov where the curator was quick to secure the place.

Archeologists from NIKUnorway working in the well.
Image: The Norwegian Institute for Cultural Heritage Research

Archaeologists working in Trondheim in Norway are amazed by the discovery of a human skeleton in the bottom of an abandoned castle well. The skeleton provides evidence that confirms dramatic historical events mentioned in the Sagas.

The location and contents of the well are mentioned in Sverre’s Saga, a chronicle of one of the kings of Norway, and one of very few historical manuscripts describing events in the Norwegian Viking age and medieval period.
Scholars have questioned the chronicle’s trustworthiness as a historical document. But now, at least one part of the saga seems to hold truth – down to the tiniest detail.
“This is truly astonishing. As far as I know there is no known example of the discovery of an individual historically connected with an act of war as far back as the year 1197. And the fact that this actually corroborates an event described in Sverre’s saga is simply amazing“, says lead archaeologist at the site, Anna Petersén.
Read the rest of this article...
Posted by David Beard MA, FSA, FSA Scot at 11:44