How Much Viking Lore Is True?


Archaeologists have confirmed key details in Norse oral histories (but not the dragons, elves, and trolls).

In TV series from Vikings to Game of Thrones, the icy wastes of the north provide the backdrop to dramatic, often violent, stories of kings and warriors, dragons and trolls. The source for many of these dramas is the Icelandic sagas. In her new book, Beyond the Northlands: Viking Voyages and the Old Norse Sagas, historian Eleanor Rosamund Barraclough explores the world of the sagas, teasing fact from fiction to show that there was much more to the Norse peoples than rape and pillage. (Find out whether the Vikings deserved their terrible reputation.)
Speaking from her home in Durham, England, she explains how the United States should really celebrate Leif the Lucky, not Columbus, why the Soviets hated the idea that Russia had been founded by the Vikings, and how the gruesome Viking torture known as the Blood Eagle may have been more poetic conceit than historical practice. (Did Vikings make the modern world possible?)

A large Viking manor has been found near the ancient town of Birka in Lake Mälaren.
Birka, on the island of Björkö in Lake Mälaren, 40 kilometres from Stockholm, is thought to be Sweden's oldest town and has been the site of excavations since the 17th century.
But there is still plenty left to be discovered on the island, as Swedish and German researchers' latest find proves.

Thanks to high-resolution geophysical surveys carried out in September 2016, researchers now believe they have located one of the most important Viking halls of the era, situated in the harbour bay of Korshamn, outside of Birka's town boundaries. They believe that it can be dated to the period after 810 AD.

“This kind of Viking period high status manors has previously only been identified at a few places in southern Scandinavia, for instance at Tissø and Lejre in Denmark,” said Johan Runer, archaeologist at the Stockholm county museum, in a statement.
Read the rest of this article...
Posted by David Beard MA, FSA, FSA Scot at 08:49


The excavation of a rare, intact Viking boat burial in western Scotland has been set out in detail for the first time. 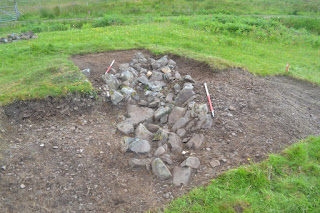 The boat burial is the first found intact on the UK mainland [
Credit: Ardnamurchan Transitions Project]

Artefacts buried alongside the Viking in his boat found in Ardnamurchan suggest he was a high-ranking warrior.In a report published by Antiquity, archaeologists describe the finds including a sword, spearhead and 213 of the boat's rivets.The weapons indicate the burial of "a warrior of high status".
Archaeologists, including Dr Oliver Harris of the University of Leicester, first revealed the discovery at Swordle Bay in 2011.Since then experts have been studying the burial site and its "rich assemblage of grave goods".Among them were a single copper alloy ringed pin, thought to have been used to fasten a burial cloak or shroud, a broad bladed axe, a shield boss and whetstone made from rock found in Norway. Also found were mineralised remains of textiles and wood.

Scientists divided over whether 'Furku.Al' rock inscription is genuinely the work of Vikings When a resident on the Isle of Eigg decided to clean his drains, he had no idea that he would stumble upon a mystery that would baffle archaeologists around the world.

The islander’s discovery of a boulder with the letters “Furku.Al” scratched into its surface has sparked a lively debate among experts as to whether it is a genuine runic inscription.

The resident alerted Camille Dressler, chair of the Eigg History Society, about his potentially significant find, and she sent a photograph to Historic Environment Scotland (HES).

“It looks quite ancient. We are intrigued by it,” Ms Dressler told The Daily Telegraph. “We just hope it is a genuine Norse inscription as that would highlight the Norse heritage of the island.”

Bringing Vikings Back to the East Midlands The Centre for the Study of the Viking Age is pleased to report that we have been awarded a substantial grant from the Arts and Humanities Research Council Follow-On Fund for a project called Bringing Vikings Back to the East Midlands. The project will fund a variety of initiatives and events related to the British Museum/York Museums Trust travelling exhibition on the Vikings which will be on at Lakeside from November 2017 to March 2018. CSVA alumnus Dr Roderick Dale will start as Cultural Engagement Fellow on the project on 1st February. More details to follow.