Sensational find of chamber graves from the later part of the Viking Age at Fregerslev south of Hørning in Jutland in Denmark will hopefully witness to the ethos of the Viking warriors in the 10th century.

Fregerslev is a small settlement located a few km south of Hørning in the midst of Jutland near the town of Skanderborg. It lies down to a lake at an old crossing point. At the periphery of Hørning close to the road towards Fregerslev, a Viking burial ground was discovered in 2012, consisting of two inhumation graves and a tomb with two (or maybe three) chambers. While the two inhumation graves have been excavated, the chamber graves were left in situ for later excavation. However, intensive studies carried out using metal detectors as well as electromagnetic surveying left the archaeologists with tantalising glimpses of what might be a very rich picking ground for future excavations. Also, a magnificent headgear for a horse gave an inkling of what hopefully lies beneath. During the next years funding was sought while the find was kept hidden for fear of “night-owls”. Now, However, the time has come. 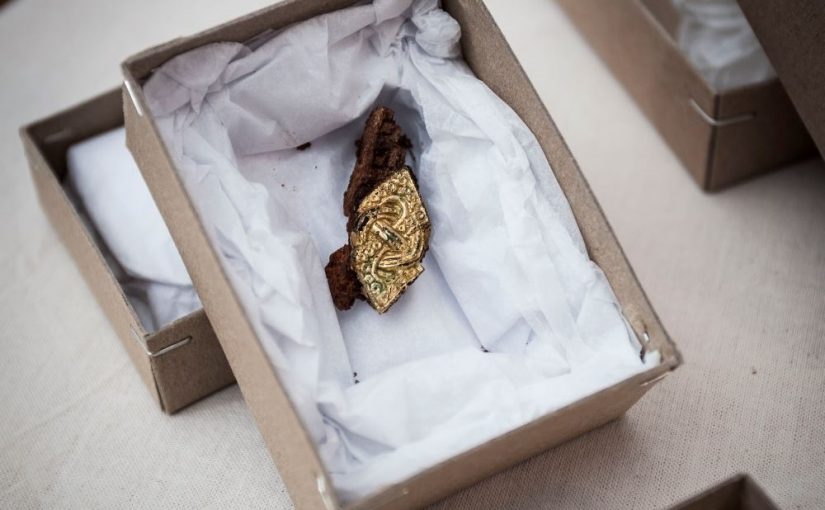 One of the beautiful, gilded fittings (photo: Museum of Skanderborg)

In what is being described as one of the most important archaeological discoveries in Denmark in recent times, archaeologists have uncovered several chamber-graves in the hamlet of Hørning near Skanderborg in Jutland.

What is of particular interest is that one of the chamber-graves contains the remains of a high-level person from the early Viking Age, as well as a number of spectacular items that confirm the individual’s high standing. He has been dubbed the ‘Fregerslev Viking’.

“The artefacts that we’ve already found are exquisite gilded fittings from a horse bridle. This type of bridle would only be available to the most powerful of people in the Viking Age, and we believe it might have been a gift of alliance from the king,” said Merethe Schifter Bagge, a project manager and archaeologist at the Museum of Skanderborg

Immigration to Denmark is nothing new … just ask the Vikings

A Viking grave in Randers shows evidence of early globalisation 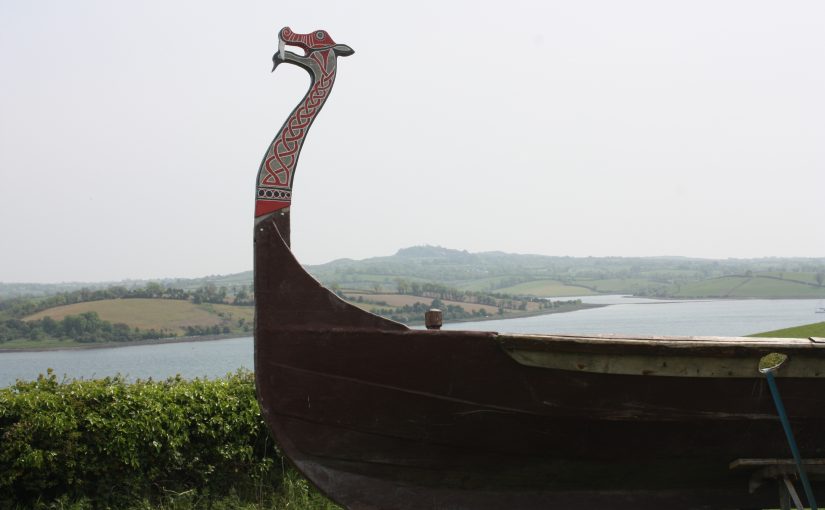 Ernst Stidsing, an archaeologist and the curator at East Jutland Museum, has discovered that the body of a woman buried in a Viking grave in Randers was born in Norway.

The remains of her teeth were subjected to a strontium analysis, which can show where a person is born and grew up. The results of the analysis, together with jewellery found with the body, pointed to the fact that she grew up in southern Norway.

Ernst Stidsing added that people have always travelled and emigrated. However, the exact circumstances of her coming to Denmark are unknown. It isn’t clear whether she came of her own free will, was a party in an arranged marriage, or if there was another reason for her presence in Denmark.

Norwegian theme park wants to be ‘Viking capital of the world’

Theme park Thors Rike (Thor’s Kingdom) wants to attract Viking enthusiasts from all over the world.
The theme park, in the western Norwegian county of Hordaland, aims to become a traditional theme park with a difference – the carousels and rollercoasters will be supplemented by “infotainment” to educate visitors about Vikings and Viking history.

“There is much talk of rollercoasters and rides, but Viking experiences and a Viking ship will also be built. The aim is to take visitors a thousand years back in time while retaining the theme park aspect,” Terje Devold, project leader for the new amusement park, told broadcaster NRK.

Devold said that he envisaged the final result as a “theme park in Viking costume”.

Courage, camaraderie, and a lack of chivalry made the Norse fearsome fighters.

From the day in 793 when Viking warriors descended on an isolated monastery in the north of England, the Norsemen became an object of fascination and terror for medieval Europeans. “Never before,” an English monk later wrote, “has such terror appeared in Britain as we have now suffered from a pagan race.”

How did the Vikings come to inspire such fear in the hearts of their opponents? Archaeological excavations of Viking graves and battlefields show they used the same chain mail shirts, long spears, and sharp, double-edged swords as other well equipped warriors all across Europe.

Their reputation, experts say, came not so much from their weapons or armor as from their innovative tactics and high morale.

Why Did Greenland’s Vikings Vanish?

On the grassy slope of a fjord near the southernmost tip of Greenland stand the ruins of a church built by Viking settlers more than a century before Columbus sailed to the Americas. The thick granite-block walls remain intact, as do the 20-foot-high gables. The wooden roof, rafters and doors collapsed and rotted away long ago. Now sheep come and go at will, munching wild thyme where devout Norse Christian converts once knelt in prayer.

The Vikings called this fjord Hvalsey, which means “Whale Island” in Old Norse. It was here that Sigrid Bjornsdottir wed Thorstein Olafsson on Sunday, September 16, 1408. The couple had been sailing from Norway to Iceland when they were blown off course; they ended up settling in Greenland, which by then had been a Viking colony for some 400 years. Their marriage was mentioned in three letters written between 1409 and 1424, and was then recorded for posterity by medieval Icelandic scribes. Another record from the period noted that one person had been burned at the stake at Hvalsey for witchcraft.

But the documents are most remarkable—and baffling—for what they don’t contain: any hint of hardship or imminent catastrophe for the Viking settlers in Greenland, who’d been living at the very edge of the known world ever since a renegade Icelander named Erik the Red arrived in a fleet of 14 longships in 985. For those letters were the last anyone ever heard from the Norse Greenlanders.


It's no surprise that the fearsome raiders relished wild boar meat. But yogurt?

Participants at the Slav and Viking Festival in Wolin, Poland tend to be sticklers for authenticity. Many adorn their bodies with tattoos, and some adopt a Viking diet, slaughtering and roasting game.
PHOTOGRAPH BY DAVID GUTTENFELDER, NATIONAL GEOGRAPHIC

All that marauding must have left the Vikings famished. It’s easy to envision a group of them around a table, ravenous after a long day of ransacking, devouring giant hunks of meat and hoisting horns-full of ale.

But that wouldn’t quite be fair, or accurate.

As tempting as it is to assume that Viking meals were crude and carnivorous, the truth is that everyday Viking fare included a range of foods that a health-minded modern person would applaud.

Picture, for example, that burly, bearded warrior throwing down his sword to enjoy a tart treat similar to yogurt, or refuel with a tangle of fresh greens.

“The Vikings had a wide range of food and wild herbs available to make tasty and nutritious dishes,” says Diana Bertelsen, who helped research and develop recipes for Denmark’s Ribe Viking Center—a reconstructed Viking settlement where visitors can immerse themselves in just about every aspect of Viking culture, including what and how they ate.

The toy boat that sailed the seas of time

Some child likely played with this carved wooden boat a thousand years ago. It was found in an abandoned well during an extensive archaeological dig at the Ørland Main Air Station, on the coast west of Trondheim.
Credit: Åge Hojem, NTNU University

A thousand years ago, for reasons we will never know, the residents of a tiny farmstead on the coast of central Norway filled an old well with dirt.

Maybe the water dried up, or maybe it became foul. But when archaeologists found the old well and dug it up in the summer of 2016, they discovered an unexpected surprise: a carefully carved toy, a wooden boat with a raised prow like a proud Viking ship, and a hole in the middle where a mast could have been stepped.

"This toy boat says something about the people who lived here," said Ulf Fransson, an archaeologist at the Norwegian University of Science and Technology's (NTNU) University Museum and one of two field leaders for the Ørland Main Air Station dig, where the well and the boat were found.

The Danish Viking King Sweyn Forkbeard conquered what is modern day England in 1013. But very little trace of the Danish Vikings is found in modern day Britons’ DNA, concluded DNA scientists in 2015. This conclusion has now come under fire from archaeologists. (Illustration: Wikipedia)


The Vikings plundered, raided, and eventually reigned over a large part of what is modern day England. But exactly how many Danish Vikings migrated west and settled down in the British Isles?
In 2015, a large DNA study sparked a row between DNA scientists and archaeologists after concluding that the Danish Vikings had a “relatively limited” influence on the British—a direct contradiction to archaeological remains and historical documents.
“We see no clear genetic evidence of the Danish Viking occupation and control of a large part of England,” write DNA scientists in a study published in the scientific journal Nature in 2015.
A new study has reignited the debate by claiming that somewhere between 20,000 and 35,000 Vikings relocated to England.
Read the rest of this article...
Posted by David Beard MA, FSA, FSA Scot at 19:34