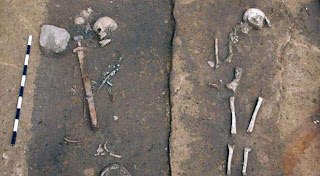 The first cities and churches in medieval Denmark were probably inspired by the English, sources show. A historian sheds light on how the English influenced the Vikings, culturally as well as politically.

When Danish Vikings sailed across the North Sea and conquered England, they left their mark on the English language and place names. That’s common knowledge, at least to historians.

What’s perhaps less known is that the influence cut both ways. Although England was under Danish rule in the Viking Age, the English were culturally and politically more sophisticated than their neighbours to the east.

Historian Marie Bønløkke Spejlborg was one of the more than 300 Norse mythology researchers who attended the 15th International Saga Conference held recently in Aarhus, Denmark.

'Eggs, legs and Grimsby' - Viking words we still use

The influence of the Vikings who came to Britain can still be heard more than 1,000 years later in the English language.

They didn't just loot and leave, at the end of the 9th Century there were large settlements of Scandinavians throughout the country.

Dr Richard Dance, of Cambridge University, tells Neil Oliver the words and places whose origins can be traced back to the Vikings. The Saga of Egil Skallagrimsson tells the story of a tenth-century Viking warrior who took part in raids in Europe and often fought with his own neighbours in Iceland. When his life’s story was written in the thirteenth-century, was the author using him as an example of the type of man that society had to worry about?

Tarrin Wills, a researcher from the University of Aberdeen, believes that Viking societies themselves were deeply concerned about these violent and unpredictable individuals – so much so that they took on the role of early criminal profilers – drafting descriptions of the most likely trouble-makers.

Wills presented his research yesterday to the British Science Festival, one of Europe’s largest science festivals. It is being held this year in Aberdeen and is expecting to attract over 50,000 people for its talks, discussions and workshops.

After examining the Icelandic sagas, Wills believes that its authors pinpointed physical characteristics of high testosterone levels – known to cause violent behaviour – creating some of the earliest ‘criminal mugshots’.