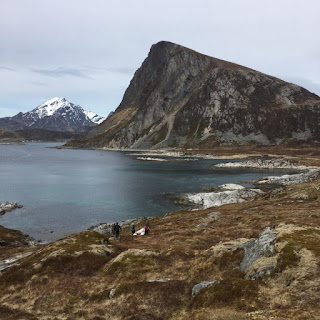 Vikings were here, but thousands of years earlier Stone Age people were, too. D’Andrea’s team hikes down to core  a small pond next to the remnants of these people’s sea-side dwellings
[Credit: Columbia University]

Billy D'Andrea, a Lamont-Doherty Earth Observatory paleoclimatologist and Center for Climate and Life Fellow is currently doing fieldwork in Norway's Lofoten Islands. He's interested in the natural factors that may have influenced the growth of northern agriculture and rise of violent Viking chieftains during the Iron Age, ca. 500 BC to 1100 AD.

The Lofoten Islands—located above the Arctic Circle—were marginal for farming, so inhabitants were probably susceptible to small temperature swings, as well as changes in sea level (two to three meters higher in the Iron Age than today).

In this area, powerful Viking rulers and their predecessors left behind hundreds of dwellings, boathouses, and other structures. D'Andrea and his colleague, Nicholas Balascio, want to understand how the Vikings influenced the land, and vice versa, as their culture took hold, and learn why Viking chiefdoms collapsed.